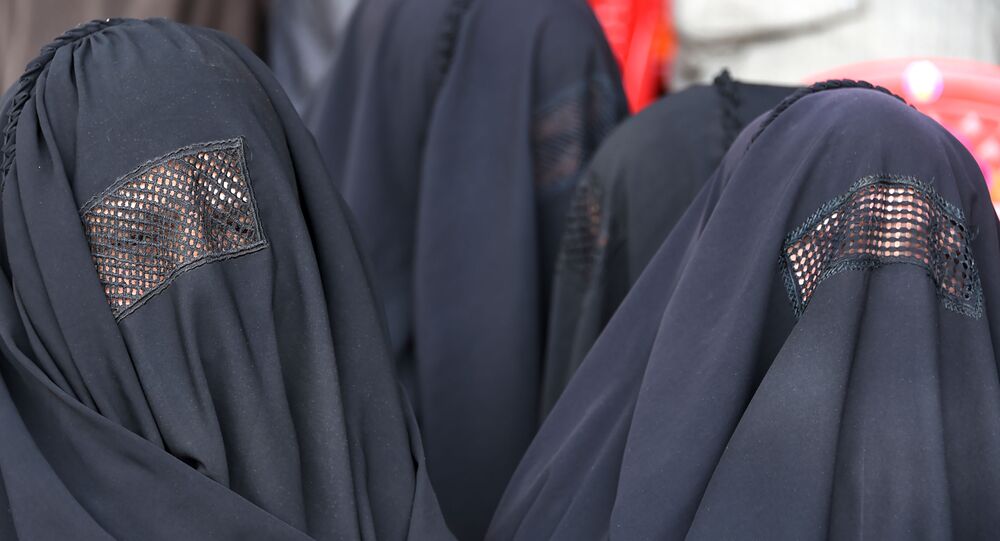 'Only Descendants of Demon Can Wear Burqa': Indian State Minister Calls for Ban on Islamic Veil

New Delhi (Sputnik): A minister from the Indian state of Uttar Pradesh has stirred up a hornet's nest by demanding a ban on the burqa or veil, which is part of traditional Muslim attire for women.

Raghuraj Singh, minister of state at the labour ministry in Uttar Pradesh, was speaking at a Sunday event in Agra when he asked the government to ban the burqa, claiming that Muslim women wear the traditional veil because they were the descendants of Suparnakha, a mythological character in a Hindu epic Ramayana, whose nose was chopped off by Lakshman, brother and companion of Lord Rama, during his 14-year penance in the forests.

Singh went on with his explosive remarks by saying that burqas are worn by terrorists to conceal their identity, while referring to protests by women against a controversial citizenship law. This legislation grants citizenship to persecuted religious minorities from Afghanistan, Bangladesh, and Pakistan who arrived in India before 2015, but leaves out Muslim immigrants.

“The system of burqa has come from Arab [sic]. They hide their face because Lord Lakshman had cut off their ears and nose. They wear burqas because they are the descendants of the demon. Only the descendants of demons can wear a burqa. No ordinary person can wear a burqa. I would also appeal to the country’s government to ban burqas because terrorists enter our country, wearing burqas. So, my fellow citizens, we have to unite because it is necessary to eliminate these goons", Singh was heard saying in a video clip.

The statement triggered a debate on social media as several backed the minister over the ban while saying that India should follow in the footsteps of Sri Lanka, which ordered a complete prohibition on all types of veils including burqas.

Why is times now toeing fake narrative , terrorism has religion & its islam. Take any 5 terrorists attacks in recent past always muslims are terrorists! So its not shocker. Its TRUTH.

Several others, however, were left aghast and alleged Indian Prime Minister Narendra Modi was responsible in the first place for saying that “those creating violence (during anti-citizenship law protests) can be identified with their clothes”.

He does have a point. pic.twitter.com/3PLftgJYqe

What's so shocking about it!!?
He's merely stating the scenario as it is nowadays,if reality is controversial so be it.
High time India is declared a Hindu State, secularism is not a one way street. Respect others to gain the same.

Why shocking??? Our PM first set the precedence of talking about people's dressing

This is not the first time the minister has made such controversial statements. He recently vowed to bury alive those who chant slogans against Modi and Uttar Pradesh Chief Yogi Adityanath.

Debates Around Burqa and Niqab Ban Flare Up in Germany