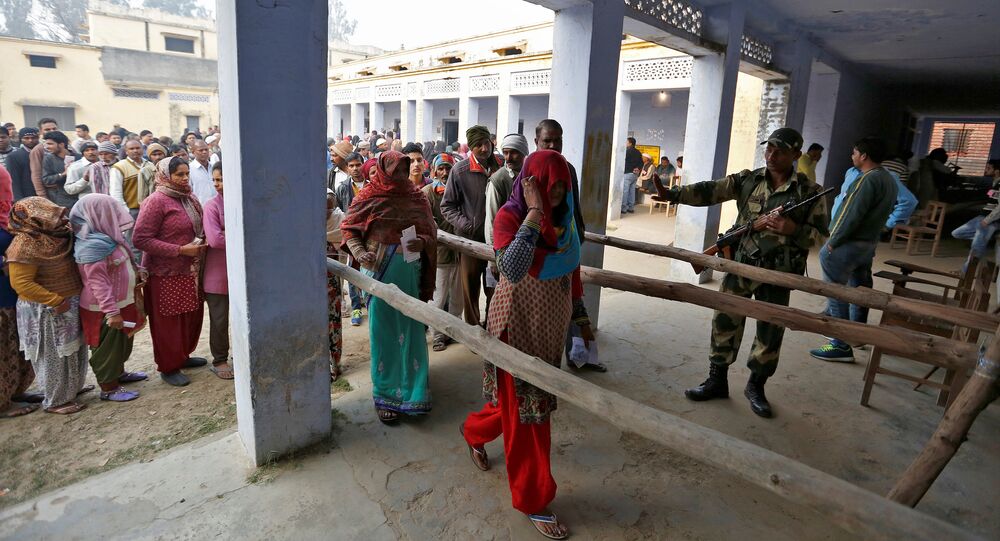 New Delhi (Sputnik): India’s Election Commission kicked off the election campaign in Delhi on 6 January opening the way for a month-long battle between three warring factions – the Aam Aadmi Party (AAP), the Bharatiya Janata Party (BJP) and Congress ahead of polls on 8 February. The results will be known on 11 February.

These voters will seal the fate of the three main political parties who will be keeping their fingers crossed for a surprise win based on their month-long political campaigning in the streets of Delhi, involving various political stalwarts.

While AAP chief Arvind Kejriwal is once again his party’s chief ministerial face, both the BJP and the Congress have not declared their candidates for the top seat in the event that their party is elected to power.

The election can be seen as a verdict on the delivery of promises by the Arvind Kejriwal-headed ruling AAP; a chance for Congress to resurrect or the Bharatiya Janata Party’s (BJP) chance to assume power after 20 long years.

The elections are also a matter of prestige for the top politicians in the three main parties.

Last time, in the 2015 Assembly polls, the newly-formed AAP came to power with a landslide victory winning 67 of the 70 State assembly constituencies. The other three three seats were secured by the BJP. Congress, which before 2015 ruled Delhi for three consecutive terms (15 years), was wiped out.

This time therefore, the election is an existential fight for Congress.

With the total number of voters going up by 1.6 million, the election will see 200,000 first-time voters (aged 18-19), which the political parties have tried their best to woo through social media campaigns and fielding young and fresh faces.

According to the Election Commission of India, of the total 14.6 million voters, the ratio of female voters has gone up to 824 per 1,000 male voters compared with 802 per 1,000 in 2015, when the last state elections took place. The total number of male and female voters is over 8.05 million and over 6.6 million respectively. There will also be around 815 third gender voters who are eligible to participate in Saturday’s poll.

The election commission on 5 February issued a notice to BJP spokesperson Sambit Patra for violating the Model Code of Conduct by giving an objectionable statement on a news channel regarding Kashmir.

Similarly, the poll watchdog issued a notice to BJP MP Parvesh Verma for allegedly calling Delhi State head Arvind Kejriwal a “terrorist”, after which, the party removed him from its list of star campaigners.

The AAP couldn’t escape trouble either. The election commission notified party leader Sanjay Singh for allegedly making a statement that could create “create confusion and panic” in Delhi.

The Model Code of Conduct is a set of guidelines issued by the election commission highlighting Dos and Don’ts for political parties and candidates during elections, mainly regarding speeches, polling days and polling booths.