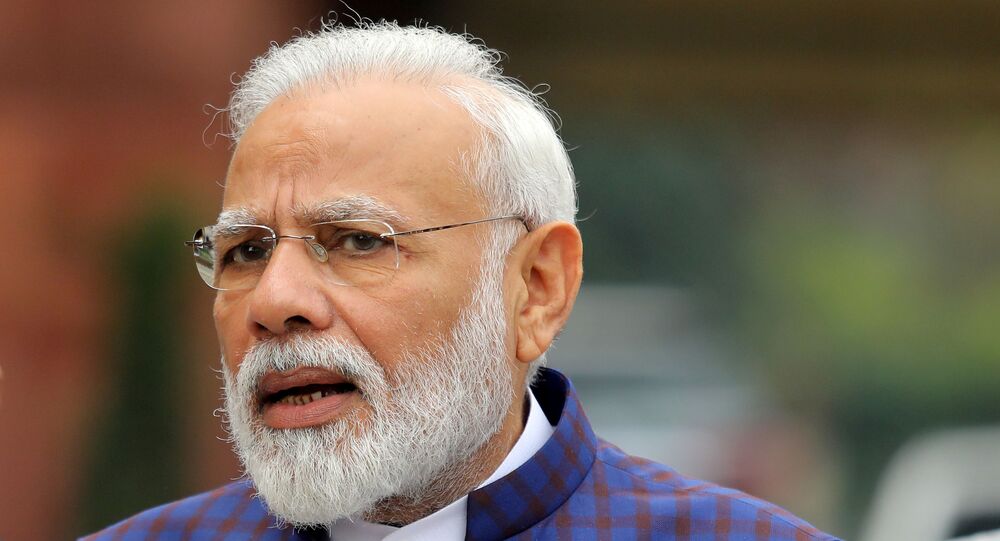 New Delhi (Sputnik): The comment made by Rahul Gandi about the leader of India's top opposition party, Congress, about youth beating the Indian prime minister with sticks has not gone down well with the ruling Bharatiya Janata Party (BJP).

Business in the Lok Sabha, the lower house of the Indian Parliament, had to be suspended on Friday morning following an uproar from the ruling Bharatiya Janata Party over an earlier remark made by the opposition party Congress leader Rahul Gandhi about Prime Minister Narendra Modi.

Addressing the existing job crisis at an election rally in Delhi earlier this week, Rahul Gandhi had said that the prime minister would not be able to come out of his home because "the youth will beat him up with sticks and make him understand that the country cannot progress without providing jobs to youth".

The onslaught on Congress was led by federal Health and Family Welfare Minister Dr. Harsh Vardhan, who took strong exception to Gandhi’s remarks.

“I want to condemn in no uncertain words the outlandish language that he has used for the Prime Minister of the country… I am surprised that Mr. Gandhi's father was a Prime Minister of this country. I don't think even in the worst scenarios our party leaders had made such outlandish personal remarks against him”.

Intervening in the matter, speaker of the house Om Birla adjourned the meeting.

BJP MP Jagdambika Pal alleged that Congress tried to attack Harsh Vardhan in the Parliament. He was quoted as saying by news agency ANI: “Union Minister Harsh Vardhan was speaking in the lower house on Rahul Gandhi's statement when Congress MP Manickam Tagore charged towards him. It is an unfortunate event for democracy.”

On Thursday, Prime Minister Narendra Modi took a jibe at Gandhi in the Parliament, saying “I heard an opposition MP saying the youth would beat Modi with sticks. I will rigorously do Surya Namaskar (the Sun Salutation Yogic Exercise) for six months to strengthen my backbone.”