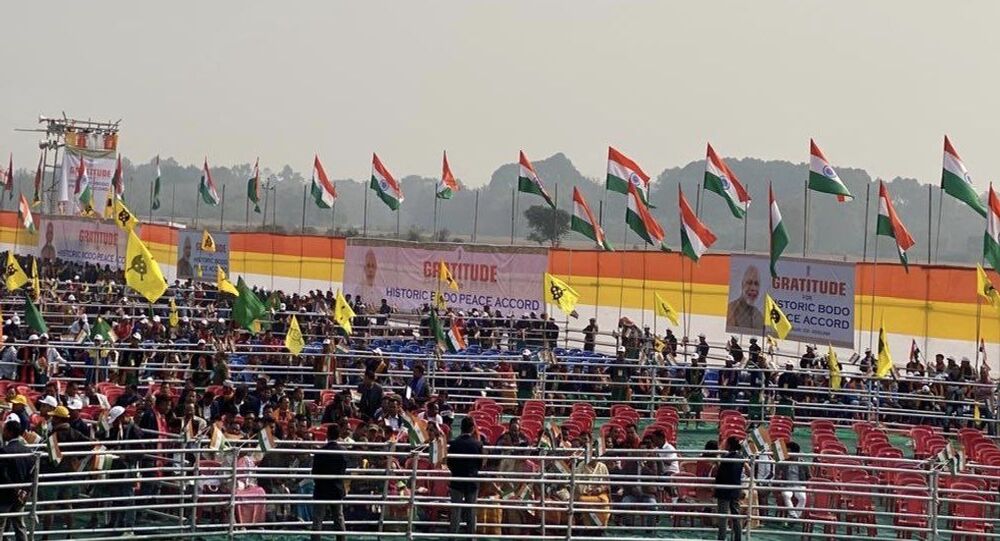 New Delhi (Sputnik): India’s federal government and an insurgent group in the north-eastern state of Assam signed a historic peace pact, finalised in late January, with one of the nation's largest tribal communities; the militants had waged an armed rebellion, demanding a separate state.

Bodos, one of the largest ethnic groups in northeast India, comprising some 1.3 million people, gathered on Friday in Kokrajhar, Assam, wearing their tribal attire to welcome Prime Minister Narendra Modi. The event, where locals waved the Indian flag, featured dancing and singing.

A grand function was organised by the state government of Assam to celebrate the signing of the peace accord, which would be attended by Prime Minister Narendra Modi and federal Home Minister Amit Shah.

Several cultural programmes to showcase the diversity of the state and its ethnic groups have been organised to welcome the arrival of the prime minister.

Enthusiasm among the People is clearly visible at the place where PM Shri @narendramodi Ji will address a public meeting in #Kokrajhar today, at an event to celebrate the signing of the Bodo Agreement. #BodoPeaceAccord #PMInAssam pic.twitter.com/xOlrbSKiIu

On my way to Kokrajhar!

Looking forward to being among people there. pic.twitter.com/OYMYIUngE2

The state was affected by the Democratic Front of Bodoland (NDFB), an armed rebellion launched by the tribal insurgent group Bodos, who had demanded a separate state since the mid-1980s, An agreement was reached on 27 January, when the Indian government signed a peace pact with them.

Home Minister Shah had announced an aid package of $211 million for the economic and political development of the Bodos.

Soon after signing the pact, a total of 1,615 members belonging to different factions of the National Democratic Front of Bodoland (NDFB), laid down their arms at a ceremony in Assam on 30 January.

The Bodo insurgency that began in 1947 was a struggle for ethnic and cultural preservation as they alleged that they were neglected by the non-tribal population of Assam. The armed movement sought better social, political and economic conditions for the tribesmen.

Large-Scale Military Operation Against Bodo Militants Under Way in India