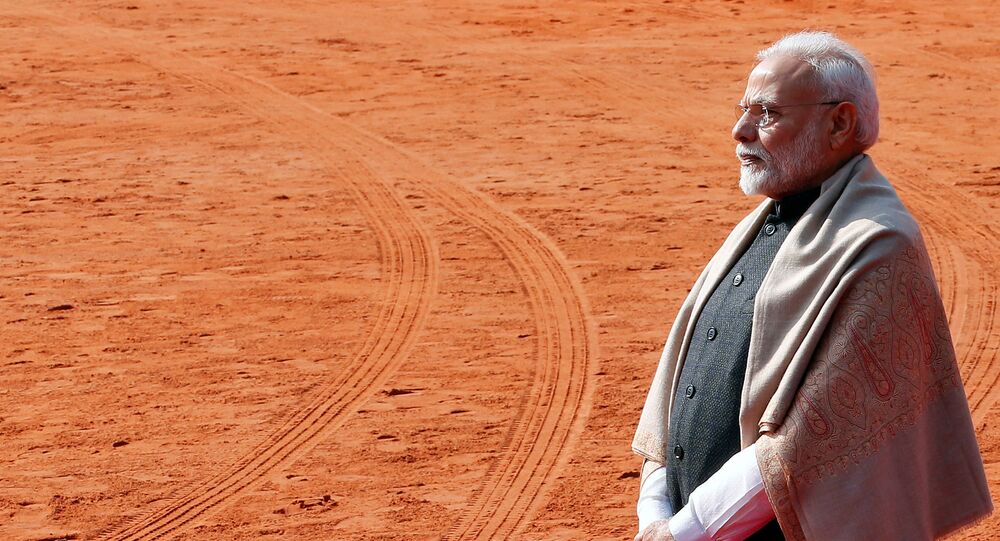 New Delhi (Sputnik): Indian Prime Minister Narendra Modi was in good spirits on Thursday as he exchanged barbs with MPs from his ruling BJP party's nemesis, the Congress Party.

Indian Prime Minister Narendra Modi took on the Indian National Congress party's former president Rahul Gandhi, who had said that the young people of the country would beat Modi with wooden sticks in six months if he didn't solve India's unemployment problem.

"You wait and see. Narendra Modi who is giving speeches now, he will not be able to get out of his home in six-seven months. The youth of India will beat him with sticks. They will make him understand that if you don't give jobs to our youth, India cannot go forward," Gandhi had said at the rally while campaigning for the Delhi election. The Prime Minister then insisted that he had been taking yoga classes and would be fit enough to defend himself in six months; he added that he would do more yoga exercises, which would prepare him for the attacks. He went on to compare his rival to a “tube light”, implying that his brain worked after a delay like a dim fluorescent bulb.

“I heard an opposition MP saying the youth would beat Modi with sticks. I will rigorously do Surya Namaskar (the Sun Salutation Yogic Exercise) for six months to strengthen my backbone,” said Modi in a dig at Gandhi; he also thanked his political rival for alerting him prior to the attack.

As Gandhi tried to interject, Modi jeered: “I have been speaking for 30-40 minutes but it took this long for the (electric) current to reach. Many tubelights are like this.” Members of the ruling Bharatiya Janata Party (BJP) busted into laughter amid desk thumping.

#WATCH Prime Minister Narendra Modi after Rahul Gandhi made an intervention in his speech in Lok Sabha: I was speaking for the last 30-40 minutes but it took this long for the current to reach there. Many tubelights are like this. pic.twitter.com/NwbQVBHWPx

Modi’s speech has  provided fodder to the meme-makers on social media, who came out out with equally hilarious memes.

This happened as soon as Modi rose to deliver his speech; Congress party politicians had started raising slogans reading “Long live Mahatma Gandhi”. While Modi waited for slogans to subside, Adhir Ranjan Chowdhury said “Yeh to abhi trailer hai (this is just the trailer of the film)”, to which Modi replied "Mahatma Gandhi maybe a trailer to you, for us he (Gandhi) is our life," leaving parliamentarians giggling.

Modi was participating in a discussion in the Lok Sabha, the lower house of Indian Parliament, on a "Motion of Thanks" following the address of President Ram Nath Kovind to a joint session of both houses of Parliament - the Lok Sabha and Rajya Sabha, the upper house, on the opening day of the budget session.

It is customary for the President to address a joint session of the Lok Sabha and Rajya Sabha on the opening day of the first session of parliament every year, which is called the Budget Session. Both houses of Parliament move a "Motion of Thanks" to the President for his address.