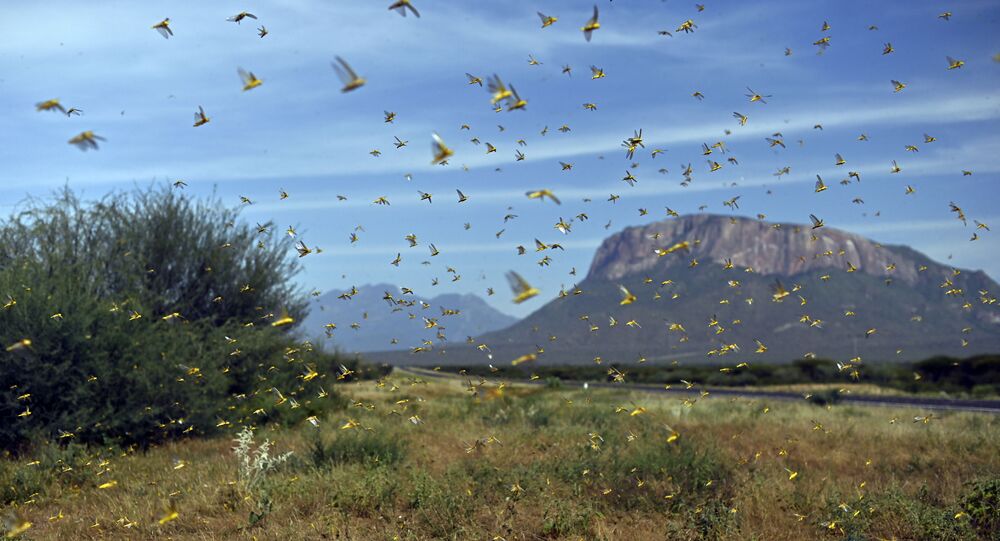 New Delhi (Sputnik): Several countries in the African continent have been invaded by locusts in recent months. The insect has also been found in the western states of India, but its impact has been most keenly felt in Pakistan.

In Gujarat and Rajasthan, which both share a border with Pakistan, hundreds of thousands of hectares of crops have been destroyed as a result of  attacks by locusts.

Pakistan is suffering the worst locust attack in two decades and declared a state of national emergency last week.

Since the locust entered India from Pakistan, Indian officials have alleged that they were not informed by Pakistan on time about locust breeding in the Las Bela area of Pakistan.

While it is easy to play the blame game in such situations, Pakistan will have tried to control the problem, says agriculture expert Devendra Sharma.

“In Rajasthan, the government had requested for declaring national calamity but that did not happen. And if Pakistan can declare state of emergency, so should have India but they did not,” Sharma says.

The Indian state of Punjab was the latest to suffer an attack but it was able to control it because of prior warnings.

A swarm of desert locusts, measuring 3km in width and 1km in length entered through Fazilka district of Punjab on Sunday. But the state government carried out a night-long, 13-hour long operation to control the pest.

Sharma claims that the attack season is coming to an end in Punjab and  Haryana, despite more locusts being spotted in Dantiwada in Gujarat.

​India has announced compensation worth Rs 13,500 per hectare of land, irrespective of how much land the farmers had cultivated.

“Whatever compensation that has been offered by the government is not enough. The crops have been completely destructed and it makes difficult for farmers as they are not left with anything,” Sharma said.

While locust attacks used to happen once a year, this year, due to climate change and prolonged rains, the locust attack has lasted longer and been more devastating.

The locusts breed in Iran, Balochistan and the Horn of Africa due to the breeding conditions of moist soil and humidity.

A swarm of locusts, which contains about 40 million insects, can eat the same amount of food in one day as 35,000 people or 20 camels.

The United Nations has called for $75 million to tackle the crisis, which has devastated African countries as well. While Kenya is said to be hit the hardest, Somalia has also declared its locust infestation a national emergency.