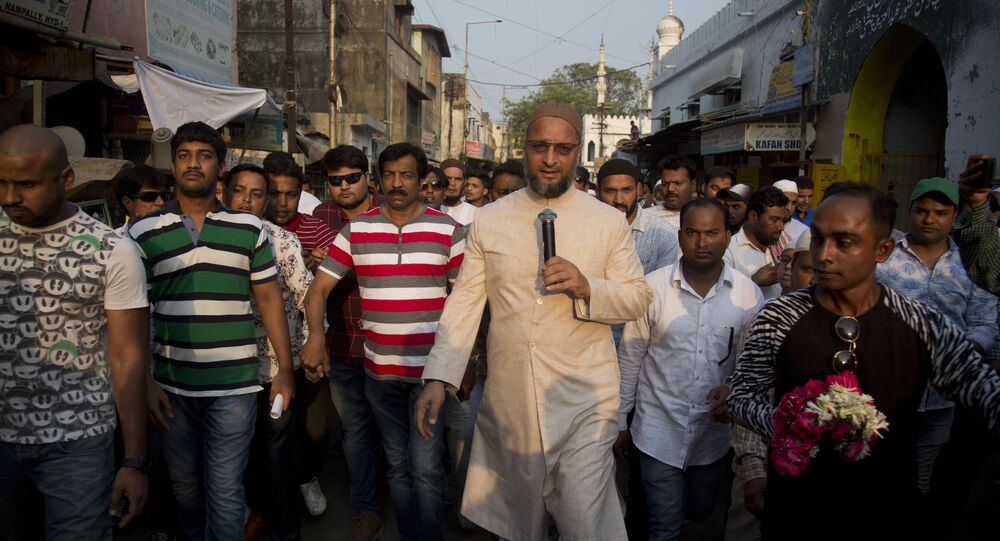 New Delhi (Sputnik): An Indian Muslim leader lashed out at the ruling Bharatiya Janata Party (BJP) in Parliament on Tuesday. He attacked the government over the controversial citizenship law and National Population of Register (NPR), and asked Prime Minister Narendra Modi to clarify if the NPR and National Register of Citizens are not linked.

Asaduddin Owaisi, president of the All-India Majlis-e-Ittehadul Muslimeen (AIMIM, translated as the All India Council for Unity of Muslims) and member of Lok Sabha (the lower house of Parliament), has challenged the ruling Bharatiya Janata Party after party leader Anurag Thakur promoted slogans that  his group “would shoot anti-nationals”.

In a video going viral on social media, Owaisi has said: “BJP members said that I am an infiltrator, so I also said in parliament that I am a father of infiltrators (ghuspetion ka baap hun). I also said that I have come after eating poha and halwa (Indian snacks). Now I am anti-national, shoot me. I also want to see. I hope whoever wants to shoot me does it in the parliament building itself.”

In another controversy, BJP's National General Secretary Kailash Vijayvargiya claimed that some construction workers at his home had “strange eating habits” because they were “eating only Poha (Indian flattened rice)”. He was told that they were migrants from Bangladesh. Karnataka minister Ravi backed up Thakur's words, saying that "anti-nationals should get the bullet, not biryani".

India's federal government has passed a citizenship law which give citizenship to illegal immigrants from Hindu, Christian, Parsi, Jain and Buddhist backgrounds, who were persecuted from Afghanistan, Bangladesh and Pakistan on the basis of their religion. However, Muslims were excluded from the amnesty, amid worries of a pending crackdown on non-citizens under a related state registration law, which has prompted a number of violent street protests.

Owaisi, who is from southern city Hyderabad, is known for his sharp statements and speeches. He opposes Prime Minister Narendra Modi and his government for allegedly rendering minorities vulnerable in the country, amid rising incidents of perceived religious violence and discrimination.