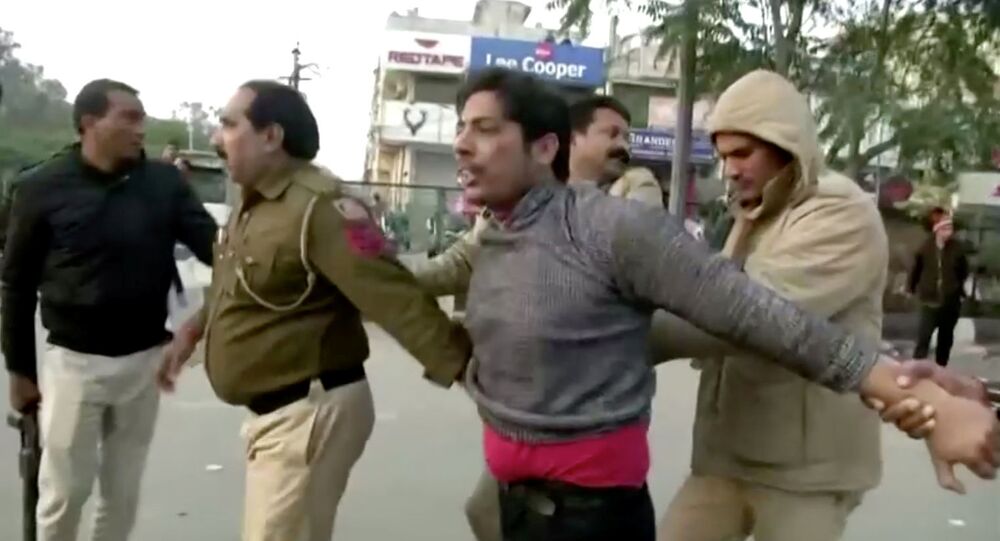 New Delhi (Sputnik): Two days ago, a gun-wielding youngster fired at a public protest against the contentious citizenship law in India’s national capital, injuring one person. The accused threatened protesters as they were marching towards a memorial dedicated to freedom struggle icon Mahatma Gandhi on his assassination anniversary.

A man was arrested on Saturday for allegedly firing near the protest site of Delhi’s Shaheen Bagh area, where people have been staging a sit-in for over 45 days against a newly amended contentious citizenship law. Nobody was injured in the incident.

Police said the suspect, identified as Kapil Gurjar, has been taken into custody.

“The man had resorted to aerial firing. Police immediately overpowered and caught him. A bullet shell has been found from the spot. No injuries have been reported”, said senior police official Chinmay Biswal.

In a video clip that went viral on social media soon after the incident the alleged shooter, while being driven by Delhi Police, is heard saying “only voices of Hindus will be heard in this country and not anyone else’s”.

Another incident of firing this time at Shaheen Bagh. Police took the man into custody. But n out before he said - “is desh main sirf hinduon ki chalegi aur kissi ki nahi chalegi” pic.twitter.com/SGA9FJGWBK

​Ahead of the Delhi State Assembly elections slated for 8 February, protests are being projected by people with vested interests as to what is perceived to be a "battle of supremacy" between Hindus and Muslims.

Muslim-majority protests, including the one at Shaheen Bagh area, are being staged against the central government for having introduced a citizenship law that, according to them, “discriminates” against illegal Muslim immigrants.

This is the third incident in the last week of a pistol being brandished in #ShaheenBagh or #Jamia. This time the man has been apprehended by the police. pic.twitter.com/6Z6YcZnvzR

Saturday’s firing incident provoked the Shaheen Bagh protestors, who hit the streets to say such attacks were planned beforehand.

“People are trying to attack and scare us in all the possible ways. This is the second time we have been attacked in two days. We will not back out and continue to protest”, said Mohammad Shadab, a protester in the Shaheen Bagh area.

In a similar incident on Thursday, a gun-wielding young man fired at a public protest against the contentious citizenship law in Delhi, injuring one person. The accused threatened the protesters as they were marching towards Rajghat, a memorial of Mahatma Gandhi, on the anniversary of his assassination. Police were later able to take him into custody.

Over the last few weeks, India has witnessed massive protests and clashes with police in different parts of the country against the controversial Citizenship Amendment Act (CAA).

Enacted in December 2019, the CAA grants citizenship to Hindu, Sikh, Christian, Buddhist, Jain, and Parsi illegal immigrants from Pakistan, Bangladesh, and Afghanistan, who faced persecution at home and arrived in India before 31 December 2014. The law, however, excludes Muslims, which has angered many people, who view it as discriminatory and unconstitutional - something the federal government strongly denies.