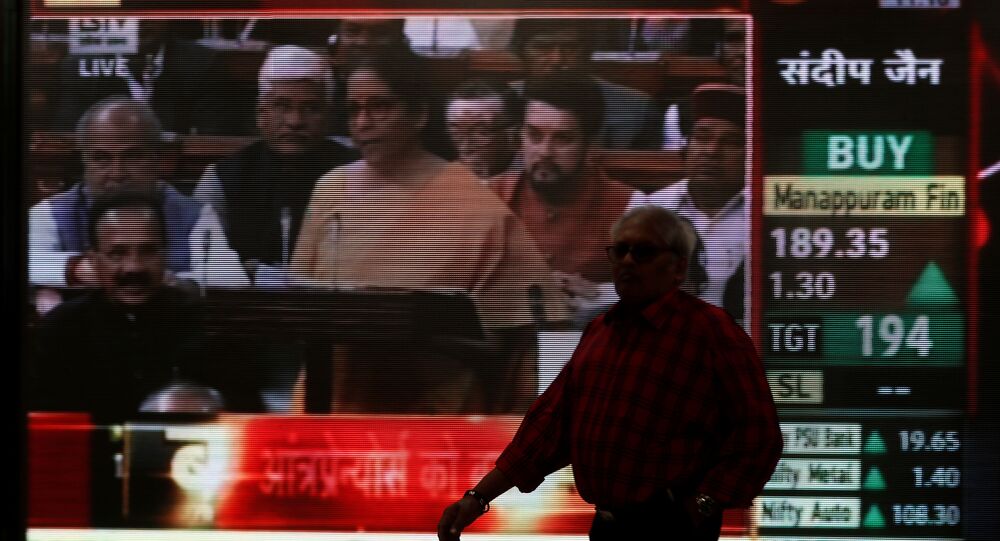 New Delhi (Sputnik): The Narendra Modi government recently revised the current year’s (2019-20) nominal GDP growth projections to 7.5% from 12% projected last year. Industrialists have appreciated the budget, but at the same time mentioned that it is not at the level they expected.

In her budget speech, the finance minister also relaxed the fiscal deficit for the current financial year (April 2019 - March 2020) to 3.8 percent against 3.3 percent planned earlier.

The fiscal consolidation has been relaxed to make way for higher allocations to stoke growth in a slowing economy. The Indian economy has slowed to 4.5% in terms of GDP growth against eight percent seen in 2018.

In this budget, the Modi govt has taken effective steps to rationalize the tax system, boost the basic infrastructure, strengthen the banking system, promote investment and ease of doing business, which will further Modi govt’s resolve to make India a 5 trillion-dollar economy.

​The fiscal deficit for the next financial year has been pegged at 3.5 percent of GDP.

In her budget speech, Sitharaman pegged the country's borrowing to $75.49 billion in the financial year 2020-21.

Allocations worth $40 billion have been made in the rural segment for agriculture, irrigation and allied sector. An allocation worth $9.71 billion has been made to the health sector.

For the education sector, the government has made an allocation of $14 billion for 2020-21.

Naushad Forbes, president of the Confederation of Indian Industry - the country's top industry body - said that government borrowing will create huge confusion in the minds of investors.

"The numbers that I have been seeing is that Union government owes $42 billion. That is a huge number. If it owes $42 billion and simply recognising that and then paying it off would be a huge stimulus and huge liquidity confusion into the economy", Naushad Forbes said.

Sangeeta Reddy, president of FICCI, said that finance minister had done a commendable job, balancing the need for growth, focussing on the innovative sectors and agri as well as finding methodology to put money back into the hands of people.

The president of the industry association Assocham, Niranjan Hiranandani, said that the budget is "fantastic" as far as its direction is concerned.

"Budget is positive and growth-oriented. But the allocations could have been more. We won't have minded a wider budgetary deficit for the purpose of instilling growth in the economy", said Hiranandani.

Former president of Assocham, Sunil Kanoria, said that it is “a good budget overall”.

"The budget has touched upon all key areas of the economy, that need to be kick-started like rural and infrastructure sectors", he added.

The Federation of Indian Export Organisations (FIEO) president, Sharad Kumar Saraf, has said that the budget has made an attempt at structural changes in agriculture, horticulture, and pisciculture, as well as that one district one product can be a game changer for exports.

"The new scheme for electronic sectors including mobile, semi-conductors and electronic equipment will pave the way for increasing electronics exports from the country particularly of the mobile in which substantial domestic capabilities have already been created resulting in exports of mobile phones from India to Middle East, South Asia and Africa", Saraf emphasised.

However, most of the industrialists have viewed this budget as not being compatible in terms of economic development.

"This is a budget which is aspirational but I don’t think it is absolutely for economic development. Not the degree to which we expected", Amit Gossain, MD of Kone Elevator, said.