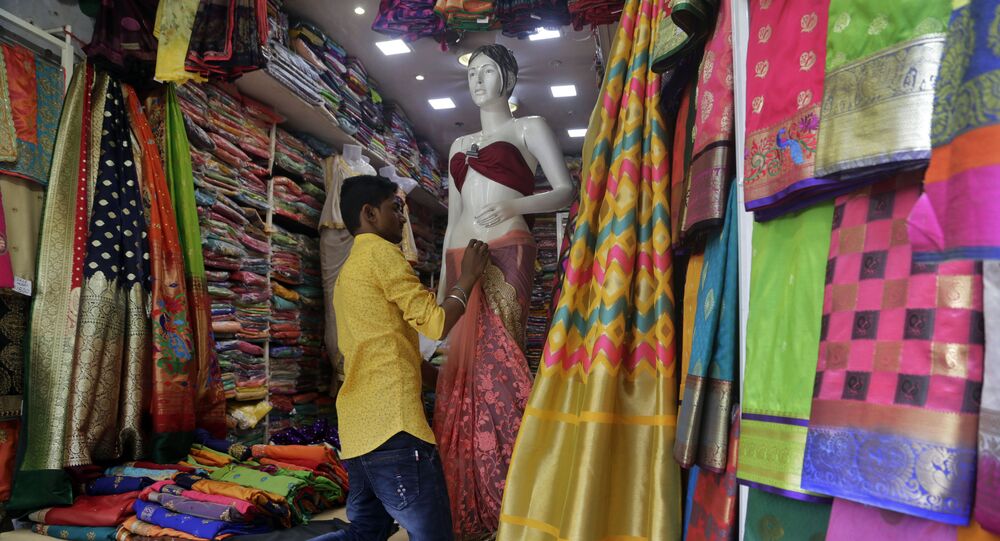 New Delhi (Sputnik): The highly-anticipated Union Budget presented by Finance Minister Sitharaman seems to have given a new lease on life to the textile sector by proposing a National Technical Textile Mission with an outlay of Rs.1,480 crore ($206,995) for over four years to cut imports.

Indian Finance Minister Nirmala Sitharaman on Saturday said a digital refund of duties and federal, state, and local taxes to exporters will be allowed starting this year.

Some of the industry's leaders, closely associated with weavers and craftsmen, reacted to this year’s budget with delight as they opined it will boost job opportunities too.

Talking to Sputnik, Fashion Designer Gautam Gupta, associated with around 200 weavers directly or indirectly through different clusters, said: “The textile industry is one of the few industries in India which are very labour intensive. It requires a lot of government support in terms of funding because of the schemes and infrastructure that are required especially if we talk about the handloom industry".

“I hope tenures after tenures, government after government and budget after budget, textile industry and especially handloom textile industry get government support. With sustainable and environment-friendly fashion making a strong noise internationally, if we preserve it well, we can be a global player in the textile sector", the fashion designer added.

He also feels that such steps will give a boost to workers at the ground level: “If the raw material is coming at competitive pricing and if that gets a boost, even the garment construction, the tailoring department, workers who work around them, will get a boost. We are losing lot of exports with Bangladesh and Vietnam because of less support back home. So, if we are able to manage the pricing, even the export segment of the textiles will really go up", he added.

As per  the India Brand Equity Foundation, a trust established by the Department of Commerce, Ministry of Commerce and Industry, India's overall textile exports during FY 2017-18 stood at $39.2 billion and is expected to increase to $82 billion by 2021.

It is also reported that the textile industry is one of the largest employment generating sectors in India and offers direct employment to over 35 million in the country.

Fashion designer Varija Bajaj says that it is good to see the government understands “that we are lagging behind technically which is why several steps were expected and this is very positive move”.

She also felt another aspect that textile manufacturers were expecting or hoping was that an “import duty on machinery for textiles would be slashed so that they can compete with international textiles because at the end of the day customers are not bothered whether the textile is made in India or not, they are bothered about what’s the output of the garment that they get”.

“This is why lots of designers or garment manufacturers are forced to get international level textiles. So from that perspective, it is a good move to understand that we have to compete technically in the world market. We have to focus on research and development and the technical aspect of textiles", she told Sputnik.

She also feels that creating jobs is directly linked to demand as for her “it’s a vicious circle”. “Eventually people wll be laid off if there is no demand. The demand at the front end has to be created".

In an age and time when the Indian fashion industry is focusing heavily on sustainable and eco-friendly items, India's cotton-spinning industry has been struggling with profitability over the years. This is due to several reasons including a sharp decline in yarn exports and cheaper imports.

Conditions were so bad that the Southern India Mills’ Association (SIMA), a textile mills group, even requested the Minister of Textiles and Women and Child Development Smriti Zubin Irani to intervene in the matter and take the necessary steps.

Asked if they are happy with latest budget announcements, Dr K Selvaraju Sima, Secretary General of the Southern India Mills Association, told Sputnik, “actually, we didn’t have much demand accept technology mission on cotton we have been asking in agriculture”.

“By and large it’s all attractive things (the proposed announcements). Also, technical textile is a national mission and a good thing". he added.