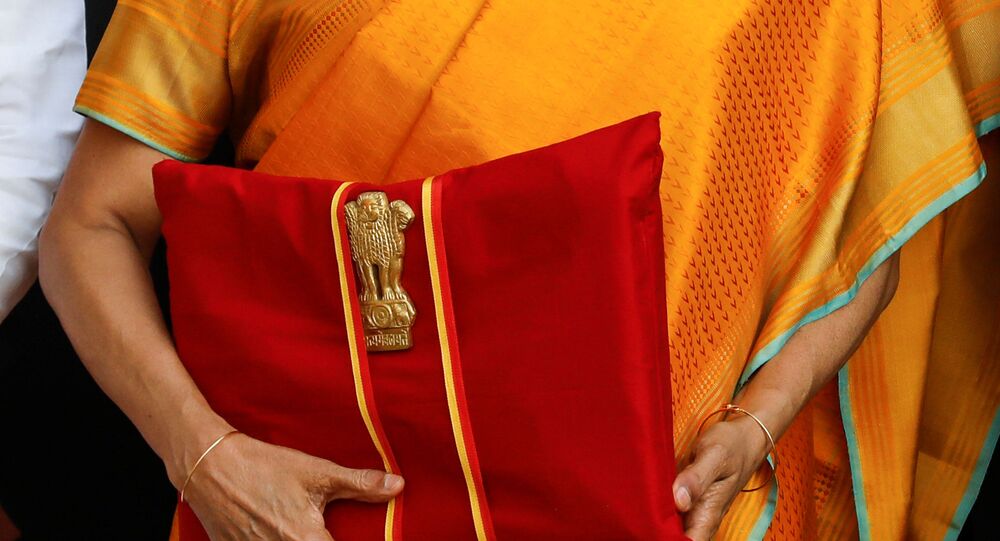 New Delhi (Sputnik): Prominent political leaders from Indian opposition parties are lining up their expectations about the budget on social media and are anticipating what the new fiscal plan has in store for the ailing national economy.

India's Finance Minister Nirmala Sitharaman and her team are getting ready to present the highly-anticipated budget for the 2020-21 fiscal year later on Saturday.

Outside the finance ministry, the entire budget-building team, including Minister of State for Finance Anurag Thakur, was seen with Sitharaman.

​This time too, Sitharaman has ditched a leather briefcase and opted for a traditional, hand-made red ledger with the national emblem on it to hold budget documents.

It is expected that the new budget will offer income tax incentives and allocate more funds to increase state spending on infrastructure in an attempt to revive economic growth, which hit a decade-low last year.

In an economic survey presented on Friday, it was predicted that the country's economic growth would increase from between 6.0-6.5 percent.

Meanwhile, Twitter is abuzz with politicians and business tycoons sharing their expectations from the budget, with some projecting it as a measure that will provide a “healing touch” to the general public and improve the state of the economy.

Our economic cancer needs immunotherapy not chemotherapy. We need to treat the causality not the symptoms - hope #Budget2020 takes this approach. Wealth creation is a key part of our economic immune system! Waiting eagerly to hear Fin Min @nsitharaman

#Budget2020 is the time for NDA govt to provide a healing touch to common people & industries, who have been facing hardships since noteban. Hope the budget fulfills expectations of common people and provide relief across sections.

No economic revival can happen when Union ministers in the Modi govt and BJP leaders work actively to destroy Indian society. pic.twitter.com/XQToenlrPT

​The challenges that the finance minister is currently facing are falling revenues, low investment, and lacklustre growth.