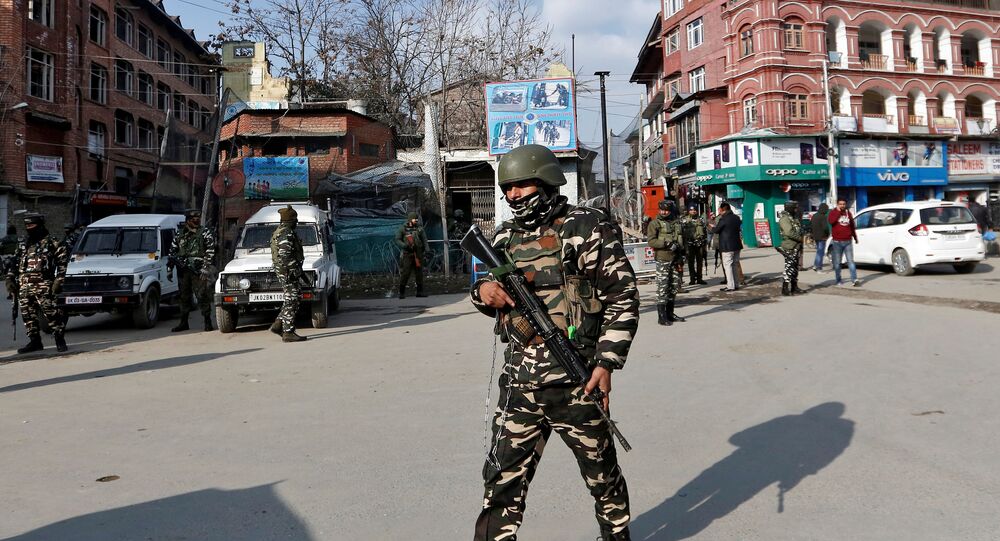 Three Militants Killed, One Policeman Injured in Gunfight in India-Controlled Part of Kashmir

New Delhi (Sputnik): Security forces in India’s restive Jammu and Kashmir have recently been on alert after several incidents of militant attacks in Pulwama district in South Kashmir.

On Friday morning, during a routine vehicle inspection, Indian security forces were fired upon by suspected terrorists, who were hiding in a truck. During the exchange of fire, three terrorists were killed and a policeman was injured.

Mukesh Singh, Inspector-General of Jammu, told reporters: “Three terrorists were killed in the encounter on Jammu-Srinagar highway and a policeman was injured in the firing. There is the possibility that at least 4 more terrorists are hiding in the area. The area has been cordoned and a search operation is on.”

The injured police officer has been shifted to hospital and security forces recovered one AK-47 assault rifle and grenades from the truck in which the militants were hiding, Singh informed.

Meanwhile, two explosions were heard near Bann toll plaza on the Jammu-Srinagar national highway during the encounter, police officials said.

Jammu and Kashmir has been kept behind a heightened security cordon ever since a suicide bomber belonging to Jaish-e-Mohammad (JeM) attacked a convoy of troops in Pulwama in February 2019, killing over 40 soldiers.

India then accused is western neighbour Pakistan for shielding and providing shelter to the UN-declared terrorist Masood Azhar, who heads JeM. Islamabad strongly rejected the accusations.

Tension between nuclear-armed India and Pakistan rose again in August in the aftermath of New Delhi’s decision to abrogate Article 370, which granted special status to the erstwhile state of Jammu and Kashmir and divided it into two federally-administered territories.

Since then, the state has adopted security measures to ward off any flare-up of militancy in the region, with prohibitory orders and restrictions in place. Several political leaders and activists have also been taken into preventive custody.