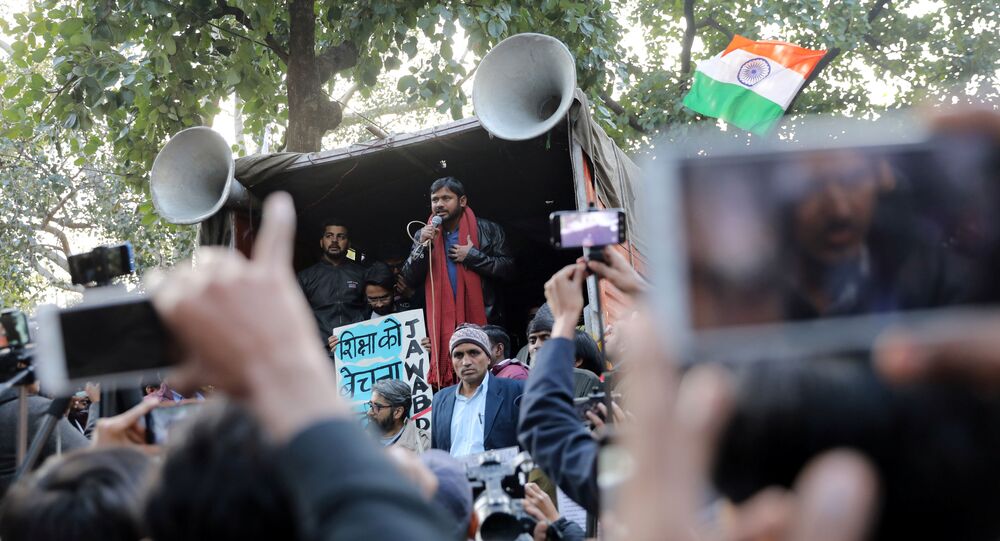 New Delhi (Sputnik): Protests against India’s contentious Citizenship Amendment Act (CAA) have been going on since December 2019. Critics of the law, which gives citizenship to persecuted Hindus, Sikhs, Buddhists, Parsis, Christians from Afghanistan, Bangladesh, and Pakistan, but not Muslims, claim it is discriminatory.

Kanhaiya Kumar, a politician from the Communist Party of India (CPI) and former JNU Students' Union President, was detained on Thursday in the state of Bihar for holding a ‘Save the Constitution Rally’ against the Citizenship Amendment Act (CAA).

The latest month-long rally was supposed to begin from Bihar’s West Champaran district and end at Gandhi Maidan in Patna city on 29 February.

Kumar, who has often criticised Indian Prime Minister Narendra Modi at public platforms and elections rallies, was scheduled to address a gathering at the beginning of the rally but the West Champaran sub-divisional magistrate said the former did not have permission to hold the rally.

He was taken into custody in the Bapu Dham area in Champaran, where he was addressing people before the rally on the occasion of Mahatam Gandhi’s death anniversary (30 January).

In a Twitter post shared by Kanhaiya, he told the crowd that permission to hold the rally which was cancelled last night.

​Kanhaiya first became known in 2016 when he was arrested by the Delhi Police on sedition charges following sloganeering at an event organised by students at the Jawaharlal Nehru University (JNU) campus.

It was alleged that Kumar, the then JNU students’ union president was chanting slogans against the unity and integrity of the country.

After getting his PhD from JNU, Kanhaiya has been active in politics and even contested the 2019 parliamentary elections from his home town Begusarai constituency in Bihar. Ever since the Indian parliament passed the Citizenship Amendment Act (CAA), Kanhaiya has been at the forefront of criticising the law by holding rallies and protests in different parts of the country.

The Citizenship Amendment Act, introduced by the federal government in mid-December, stipulates citizenship to illegal immigrants from several religious minorities, including Hindus, Sikhs, Christians, Parsis, Jains and Buddhists, from Afghanistan, Bangladesh and Pakistan who faced persecution in those three countries and arrived in India before 31 December 2014. The law, however, doesn't extend the same rights to Muslim migrants - something which has become the driving force behind the ongoing protests, as demonstrators claim that the legislation is discriminating against Muslims and is against the Indian constitution.

The Modi government has stressed that no Indian citizen would be affected by the law as it "seeks to grant citizenship, not snatch it," with the prime minister insisting that the CAA was not discriminating against any group.