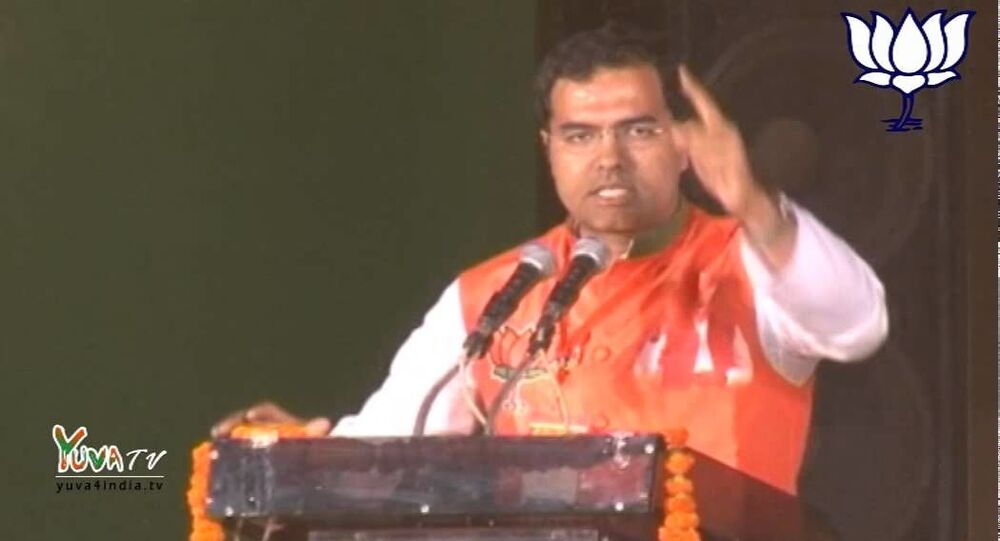 New Delhi (Sputnik): The Bharatiya Janata Party's (BJP) politicians are under the Election Commission’s scanner since two of its star campaigners running in the forthcoming State Assembly Elections have made controversial remarks, aimed at provoking voters’ sentiments.

The development came on a day when the poll body had asked the BJP to remove two of its political campaigners – Parvesh Verma and Anurag Thakur -- from the ongoing campaign for the Delhi legislative assembly elections in response to the controversial remarks they made a few days ago.

Verma was campaigning for a BJP candidate in Madipur area when he called Kejriwal a “terrorist”.

He said if Kejriwal returned to power in Delhi, then the Madipur area will also become another Shaheen Bagh, where protests have been going on against the Citizenship Amendment Act (CAA) for over a month.

Verma also said in Delhi, people like Kejriwal are hiding and it is important to bring them out.

Chief Minister Kejriwal is a terrorist and it is important to save our daughters from him, Verma was quoted as saying by Hindi new website Amar Ujala.

Taking cognizance of the matter, the Election Commission has issued a show-cause notice to Verma. On Tuesday, the Commission had also issued notices to BJP politicians Anurag Thakur and Parvesh Verma for their controversial remarks at two election rallies in Delhi. The BJP removed both of them on Wednesday in the ongoing campaign.

With election campaigning reaching a feverish pitch, all three parties the AAP, BJP, and Congress are making strong political speeches and fighting to win over millions of voters in Delhi. The national capital is set to go to the elections for the 70-member legislative assembly on 8 February.