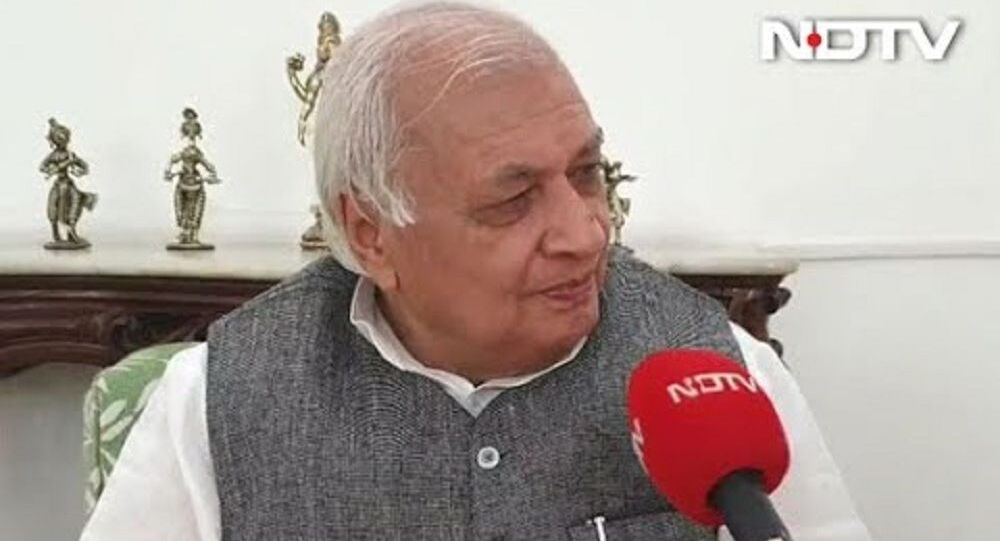 New Delhi (Sputnik): The ruling coalition and opposition parties in India’s southern state of Kerala have been at loggerheads with Governor Arif Mohammad Khan over the issue of the controversial Citizenship Amendment Act (CAA), enacted by the federal government.

Tensions came to a head in Kerala's state legislative assembly on Wednesday, on the opening day of the budget session, when the governor arrived to make a customary address. Legislators belonging to opposition parties blocked Khan, who was being escorted by State Chief Pinarayi Vijayan, shouting slogans at him. The protesting members initially refused to budge from the spot and raised slogans reading “Governor Go Back” and “Recall the Governor”.

Marshals of the state assembly had to be summoned to convince the lawmakers to take their seats and allow the governor to deliver his address. Governor Khan was seen folding hands and saying “thank you” after the opposition lawmakers agreed to step aside and allowed him and the marshals to proceed to the lectern.

Khan had earlier asked for an explanation from the state government on its decision to challenge the CAA in the country's highest court. But the state government held that it was a matter between the provincial and federal government and it was within its rights to move to the Supreme Court, without his consent.

Indian National Congress, which leads a coalition of opposition parties, also signalled its intention to get a resolution passed against the governor, thereby putting more pressure on State Chief Vijayan to confront Khan more directly and come clean on what the opposition described as a “secret pact” with the federal government led by Bharatiya Janata Party (BJP).

The reluctant governor later agreed to read the paragraph of the address that highlighted the state government’s stance on the CAA, though he maintained that it did not constitute being part of a state policy or programme.

​India has witnessed widespread protests by those opposing and supporting the controversial law enacted by the federal government in December to grant citizenship to persecuted religious minorities from Afghanistan, Bangladesh and Pakistan, but not including Muslims.

Vijayan, as the chief of the elected government in the Indian state of Kerala, has consistently reiterated that he would not allow what he described, communal forces to use the contentious Citizenship Amendment Act (CAA) or the National Register of Citizens (NRC) to destroy the region, which he has described as a "fortress of secularism".