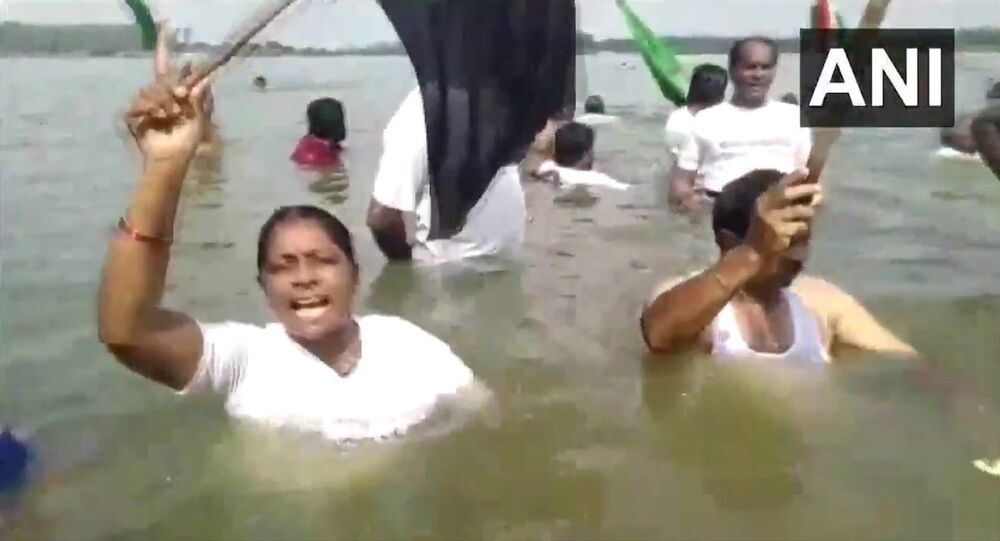 New Delhi (Sputnik): The State government of Andhra Pradesh in India which came to power in May 2019 has drafted a proposal to create three capitals in the state, dropping the project led by the previous government that envisaged Amaravati as the only capital.

To make their voices heard, a number of farmers in Andhra Pradesh have opted to stand in the Krishna River demanding that the Jagan Mohan Reddy-led Andhra Pradesh state government retain Amaravati as the only capital of the State.

In the video clip shared by Indian news agency ANI, the video shows a number of people of different age groups, standing in neck-deep water carrying black and green flags and raising slogans against the Andhra Government’s proposal to adopt three state capitals. The agitation took place in Rayapudi village in the Guntur District of the coastal state.

​Protestors in the river can be heard chanting slogans such as “Save Amaravati”. Farmers remain the major force behind the agitation, as they reportedly gave up nearly 35,000 acres of their land for the capital city project in Amaravati.

The State government has maintained that three capitals would help with the equal distribution of wealth and prevent centralisation of power.

Governor Biswabhusan Harichandan, the constitutional head of the state, has called the three capital proposal a “historic decision” that will lead to inclusive growth and integrated development.

Meanwhile, non-resident Indians, who are natives of the State, carried out a protest march in Europe on 27 January asking the state government to withdraw the proposal.

Since then, former chief minister Naidu had been a vocal critique of the state government’s decision to scrap his capital city project and has spearheaded several protests against the development.

The dispute over the capital in the State can be traced back to 2014 when the new state Telangana was carved out of Andhra Pradesh and Hyderabad was decided upon as the capital for both the southern states until Andhra selects a new capital itself.