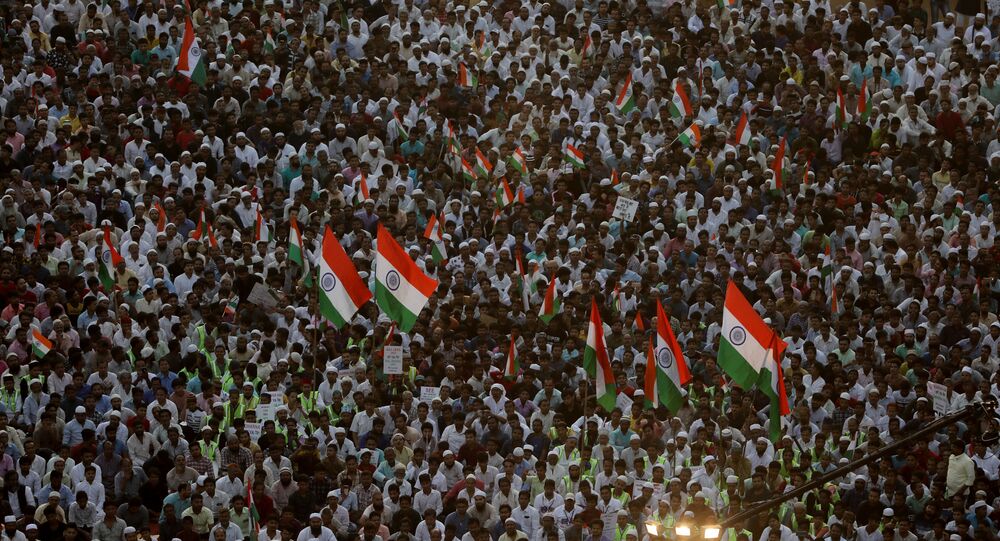 New Delhi (Sputnik): Protests against a controversial citizenship law that left at least 25 people dead across India last December have been suspected of being fuelled by the radical Islamic organisation Popular Front of India (PFI).

The agency, which has been probing the PFI under the Prevention of Money Laundering Act (PMLA) since 2018, found that at least Rs.120 crore ($16.5 million) were deposited in its bank accounts and was debited on the same day of the protest in Uttar Pradesh.

“The scrutiny of deposits in the bank accounts of PFI in Syndicate Bank, in Delhi’s Nehru Place branch, has revealed a new trend of huge and multiple cash deposits in the districts of western U.P namely Bahraich, Bijnor, Hapur, Shamli, Sasna, etc", the document read.

The ED has shared the findings with the federal Home Ministry of India.

“It has also revealed that payments have been made by PFI to Kapil Sibal, Indira Jaising, Dhyant A. Dave, Adul Samad (accused in the NIA chargesheet), PFI Kashmir, and New Jyothi Group", the document released by the agency naming the prominent people to whom payments were made.

The probe also revealed that three non-governmental organisations (NGOs) have been funding the PFI. Among these, a charity, Rehab India Foundation is currently being scrutinised by the ED.

PFI has termed the allegations of financially funding anti-CAA protests as baseless.

“The Popular Front of India has stated it multiple times that we fully comply with the law of the land and the allegation of Rs. 120 crore transferred from the PFI's accounts just before CAA protests is totally baseless and people who are leveling these allegations should prove these claims", PFI said in a statement.

Indian National Congress Party politician Kapil Sibal has refuted the allegation by saying that he had received the payments for the 2017 Hadiya case.

“I was the lawyer in Hadiya case in 2017 and I had also issued the bill of payments to my advocate. It was for professional services, how I would know in 2017 that Home minister Amit Shah would pass a bill in 2019 and there would be protests", Sibal said addressing a press conference and claiming that was a conspiracy to malign his image.

Sibal referred to the case in which a 24-year-old student Hadiya Jahan converted to Islam. Her family alleged that she was deceived into marrying her husband Shafin Jahan and was forcibly made to convert.

Twenty people were killed during violent clashes in the state of Uttar Pradesh alone, making it the highest number of deaths so far in the demonstrations again the new law.

The law, enacted on 13 December, grants Indian citizenship to persecuted minorities of Hindus, Sikhs, Buddhists, Parsis, Christians from three neighbouring Islamic countries – Afghanistan, Bangladesh, and Pakistan – if they have been living in India for “no less than five years”.

It, however, doesn't extend the same treatment to Muslims – something which many deem to be discriminatory on the basis of religion and a violation of the Indian Constitution.

India’s federal government has clarified that the law was not against any citizen, nor would it take away the citizenship of anyone.