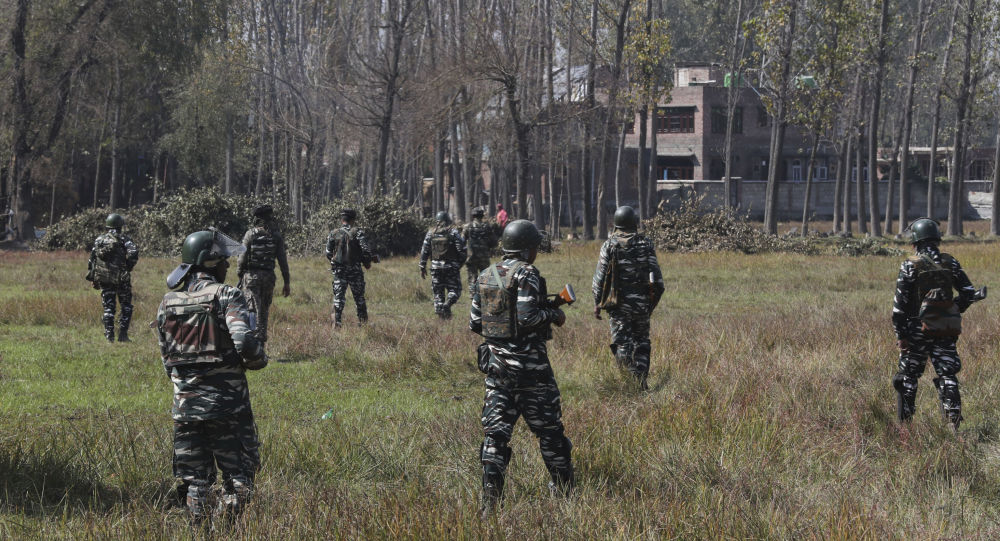 New Delhi (Sputnik): India’s restive Kashmir region has witnessed considerably fewer incidents of violence since the federal government revoked the area's special status on 5 August 2019. In January 2020, Indian security forces have gunned down at least 10 militants in the region in separate shootouts.

Security forces on the Indian-administered side of Kashmir have been engaged in an ongoing gun-battle with three alleged terrorists, including a top Jaish-e-Mohammad (JeM) commander, Qasi Yasir, in the Tral area on Saturday morning.

Yasir, who is said to be a Pakistan-based terrorist, was allegedly responsible for last August’s killing of two members of the nomadic Gujjar community.

In a separate development in Kashmir, four purported overground workers from Lashkar-e-Taiba (LeT) were held by a team of police and army in the Bandipore district of the region, Indian news agency IANS quoted police as saying on Saturday.

© AP Photo / Mukhtar Khan
Former Jammu and Kashmir Chief Alleges Harassment by India’s Special Security Groups
The workers were held in the Hajin area of Bandipore and a large quantity of arms and ammunition has been also seized by a joint security team.

These incidents come as broadband and mobile internet services have been restored in the entire northern Indian union territory of Jammu and Kashmir, but with some certain website restrictions.

On 5 August 2019, the Narendra Modi government abrogated the special status of the erstwhile Jammu and Kashmir and bifurcated it into two union territories, having restricted internet access to keep order in the region, in addition to imposing a curfew and deploying additional military personnel there.