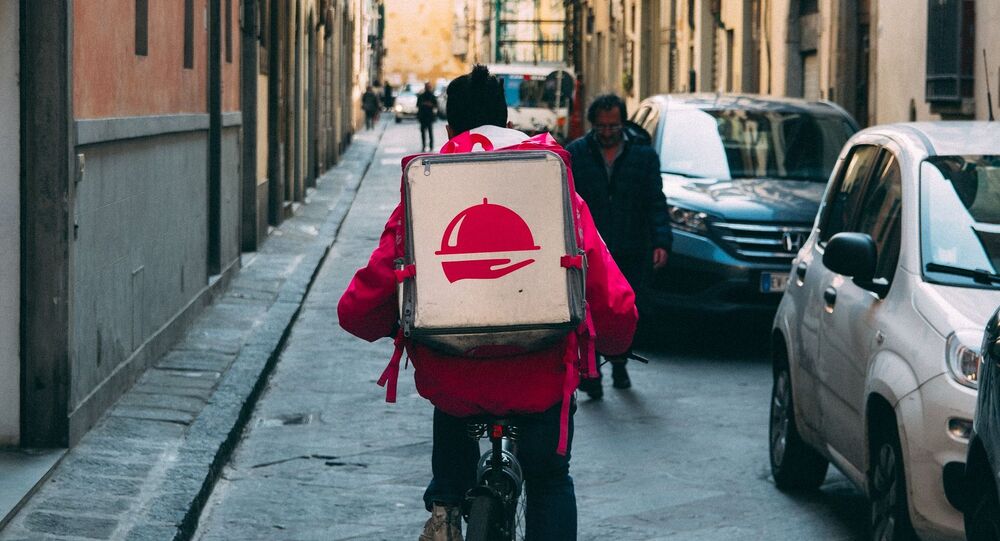 New Delhi (Sputnik): The on-the-clock millennial work and student force in India is either too bored of home-cooked meals or too busy to go out and eat, hence, this year the revenue of the online food delivery sector is expected to reach over $9,207 million, with an annual growth rate of 9.5 percent.

In a bid to bag a profit, US-based e-commerce major Amazon is gearing up to enter India's online food delivery business, starting with a beta-test that is being conducted internally among company staff, media reported on Friday.

Currently, testers are ordering food from cloud kitchens using the main Amazon app under its prime services in select locations of southern India's Bengaluru city. As part of the beta, testers are also required to share their feedback in order to fine tune the service before its commercial roll-out.

Reports citing "internal sources" claim that Amazon is joining hands with popular food franchisees in India, the names of which remain undisclosed for now.

Once Amazon commercially rolls out its online food ordering platform, it would compete with Indian players Swiggy and Zomato, partially funded by the Chinese companies Tencent Holdings and the Alibaba Group.

The news of Amazon's online food delivery services comes just days after the US-headquartered ride-hailing major Uber discontinued the operations of its UberEats venture in India, two years after its launch and struggle to establish a strong footprint in the country.

Zomato acquired UberEats along with its customer-base, restaurants, and delivery partners for nearly $350 million.

It is also interesting that Amazon is looking at expanding its service portfolio in India, especially amid protests and legal troubles surrounding its e-commerce business in the country.

On 15 January, Amazon CEO Jeff Bezos kick-started its small and medium business (SMB)-focussed "Smbhav" event in New Delhi. Bezos announced an additional investment of $1 billion to Amazon's previous investment of over $5 billion in the country.

Instead of a traditional Indian welcome, Bezos was greeted with nation-wide protests by local traders accusing Amazon of hogging up their businesses with predatory pricing and deep discounting.

In addition, Amazon is also being investigated by the country's anti-trust watch-dog - the Competition Commission of India (CCI) - on charges of unethical business practices.

Here to Stay: Amazon Vows to Create 1 Mln Jobs in India by 2025 Despite Legal Troubles