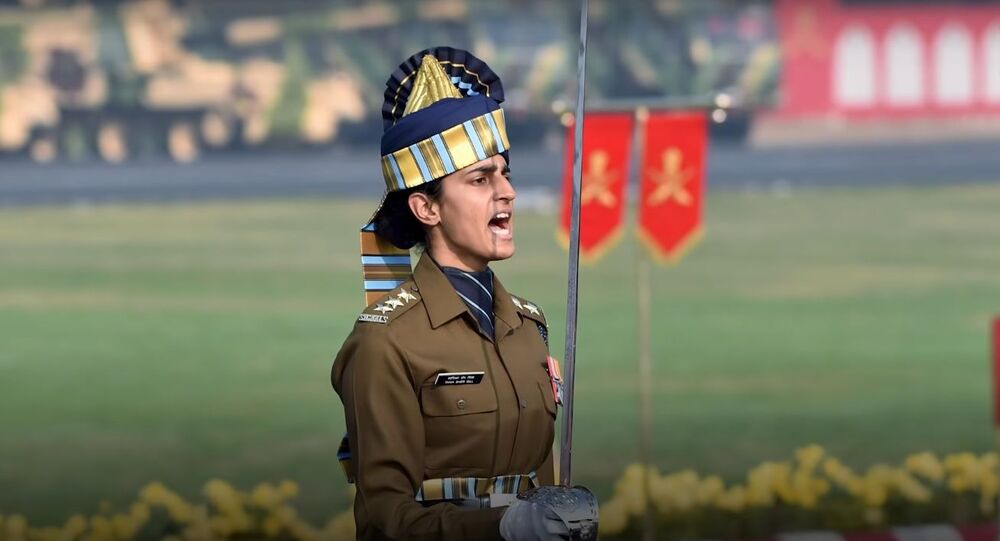 New Delhi (Sputnik): India’s military might, ranging from women power to air power and from strategic capability to excellence in artillery, as well as the country’s rich cultural heritage will be on display during the 71st Republic Day parade on 26 January.

For the first time in the history of independent India, a female officer will lead an all-male Indian Army contingent as parade adjutant.

Captain Tania Shergill, a fourth generation army officer, will get the honour of leading the Indian Army’s Corps of Signals contingent down the central vista (also known as Rajpath) of India’s capital city of New Delhi.

Captain Tania Shergill, first woman parade adjutant for the Republic Day parade: Selection happened at our signals training camp about a year ago. 2 officers were selected then, to lead the contingent on Army Day parade as well as Republic Day parade. I feel good to lead it. pic.twitter.com/XNySt00bOZ

​Captain Shergill made history on 15 January when she led the same all-male army contingent during a parade in Delhi to mark the 2020 Army Day.

Gill said earlier this week that she was looking forward to her first participation in this year’s Republic Day parade.

Netizens described Gill's participation in the event as a matter of great pride.

The air defence unit of the Indian Army will also be taking part in this year’s parade for the first time. Two female air force officers – Flight Lieutenants Gagandeep Gill and Reema Rai – will be part of the 148-member Indian Air Force contingent to partake on the Republic Day parade.

​In another departure from tradition and convention, Prime Minister Narendra Modi will not lay a wreath at the Amar Jawan Jyoti or the flame dedicated to the Immortal Soldier, instead he will place a wreath at the National War Memorial near India Gate, which was inaugurated last year.

Republic Day marks the day when the Constitution of India came into effect, on 26 January in 1950, replacing the Government of India Act of 1935.

The day is celebrated annually with great pomp and show and will see the participation of all regiments of the Indian Army, Air Force, and Navy.

© REUTERS / ALTAF HUSSAIN
India's National Capital Gears up for 71st Republic Day Commemoration With Full Rehearsal - Video
A full dress rehearsal for the parade was held on 23 January, where the public got a glimpse of the visual treat they can expect on 26 January.

There will also be school children dancing to patriotic songs and colourful tableaux from several Indian states and state-run entities.

India’s President Ram Nath Kovind, who is the commander-in-chief of the country’s armed forces, will take the salute at the parade. The president of Brazil, Jair Bolsanaro, will be the chief guest at this year’s event.

As a grand finale, the Indian Air Force will perform a fly-by and carry out some manoeuvres by state-of-the-art combat aircraft, including the newly inducted Apache attack and Chinook heavy-lift helicopters.