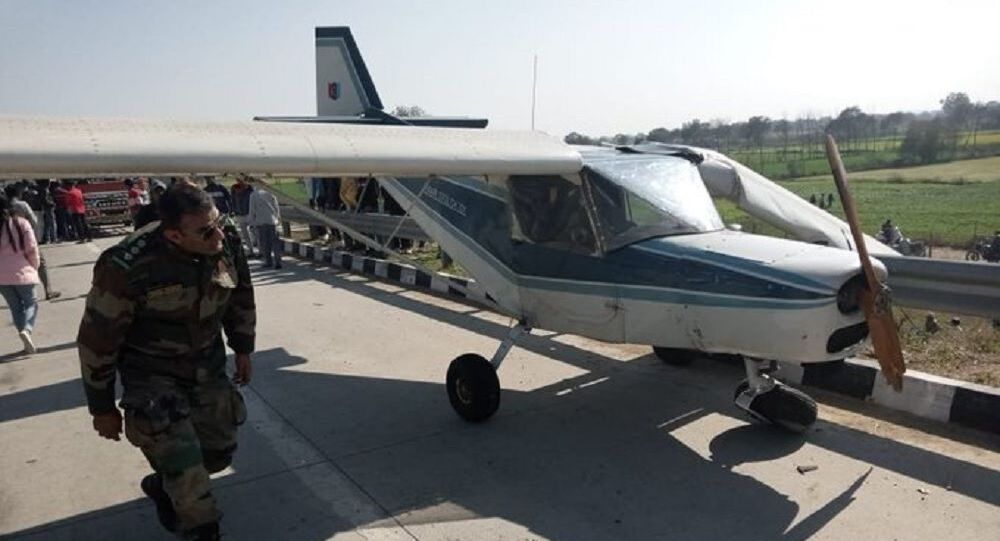 New Delhi (Sputnik): A National Cadet Corps, (the youth wing of the Armed Forces), two-seater aircraft, made an emergency landing on the Eastern Peripheral Expressway in India’s Ghaziabad area on Thursday afternoon, after developing a technical problem.

A video of the plane with its left-wing damaged on the highway is going viral. In the video, long queues of vehicles can be seen, with people from nearby villages coming out to watch the plane which is on the Eastern Peripheral Expressway.

#Ghaziabad | Emergency landing of chartered aircraft, the aircraft had to take off on the expressway due to technical flaws.#EmergencyLanding #CharteredPlane pic.twitter.com/NMpxrwunJ7

The aircraft was heading to Hindon airbase in Ghaziabad city from Bareilly, a district in India's northern state of Uttar Pradesh, 250 kilometres (155 miles approx.) away from the national capital.

According to the official, it was a Zenair CH 701 trainer aircraft which had to make an emergency landing. “Our officials have reached the spot, both the pilots and the co-pilot are safe,” the official said late afternoon.

Earlier in 2015, a Mirage 2000 fighter jet of the Indian Air Force also made an emergency landing on the Yamuna Expressway, which connects Delhi with Agra city of Uttar Pradesh.

According to reports, 12 National Highways in the country were cleared by the Indian Air Force as emergency landing airstrips to will allow rescue operation teams to reach affected areas easily.