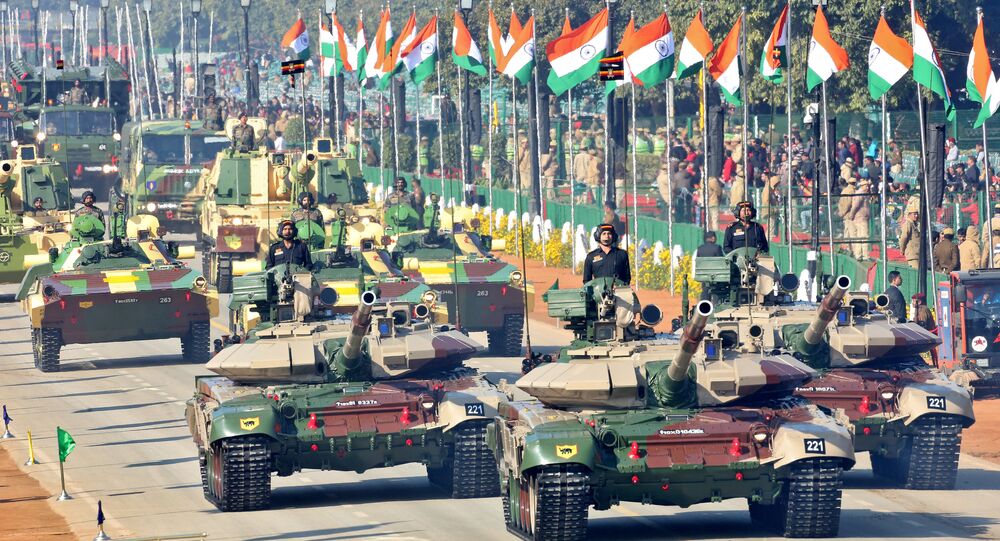 New Delhi (Sputnik): Republic Day marks the day when the Constitution of India came into effect on 26 January in 1950, replacing the Government of India Act of 1935.

As India prepares to commemorate its 71st Republic Day, a massive parade including various segments of the security forces will showcase the country’s military might. Following days of preparations ahead of the final day, the full dress rehearsal was held on Thursday.

The day is celebrated with great pomp and show as a celebration of gallantry and the advancement of security across the country. The parade will see participation by all the regiments of the Indian Defence Forces – the Army, the Air Force, and the Navy.

On Thursday, many people got a glimpse of the full dress rehearsal, held near the historic Indian Gate.

The colourful parade involved different contingents of the security forces marching to the iconic India Gate, complemented by hundreds of cheerful schoolchildren, who danced to patriotic songs, a camel cavalry along with a tableau representing various Indian states and their culture in a colourful way.

The highlight of this year’s celebration will be Captain Tania Shergill, a fourth generation Army officer, who will be the parade's first female adjutant.

On the grand day, Indian President Ram Nath Kovind, who is also the Commander-in-Chief of the country’s armed forces, will salute and address the nation.

This year the parade will also feature the country’s Border Security Force, the "Daredevils" motorcycle stunt team, Sikh Light Infantry, the Grenadiers, and the Parachute Regiment, which will make a comeback after a gap of four years.

Along with showcasing weapons and combat vehicles, the day will also have a splendid air-show for the grand finale. The Indian Air Force's new Apache attack and Chinook heavy-lift helicopters will be participating in a fly-by for the first time.