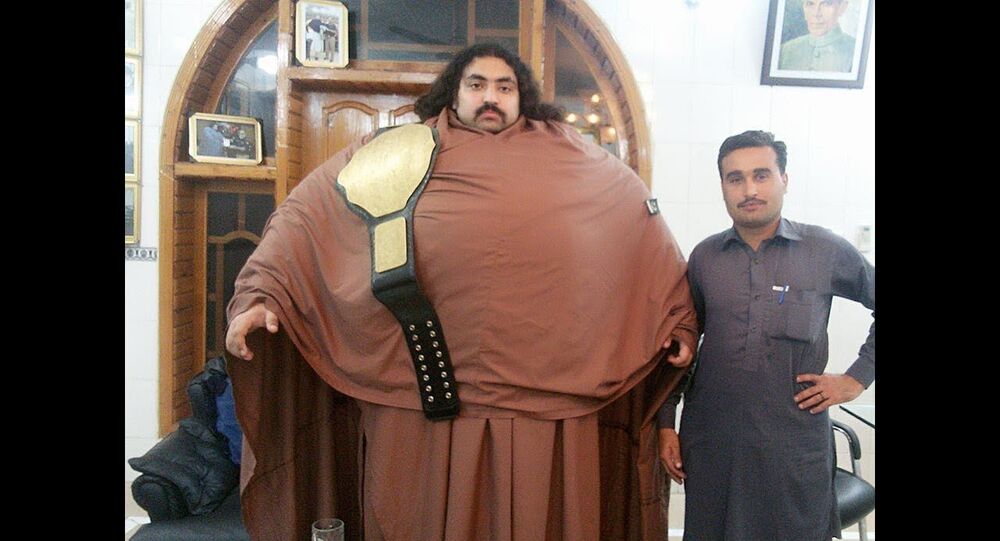 New Delhi (Sputnik): An enormous thousand-pound man in Pakistan is earnestly looking for the love of his life, who is ready to accept his bulky physique of 6’ 6”. With a huge fan following, the man has already been recognised as the strongest in the country, and is known for pulling tractors using ropes.

The 27-year-old, Arbab Khizer Hayat, who is 'high maintenance' and gorges himself on nearly 10,000 calories a day, has already rejected around 300 would-be brides so far in search of his soul mate and perfect match.

But the wish is facing hiccups because of his basic expectation from his future wife -- she should weigh approximately 220 lb. and should be at least 6’ 4” tall, as he fears someday she might get squashed under him.

“I need a heavyweight wife so I do not hurt her. All the women who have wanted to marry me so far have been too skinny,” he told British newspaper Daily Mail.

It’s been seven years that the Pakistani celebrity has been looking for a match and is adamant that both of them should look right together.

Hayat claims that despite his weight and mammoth diet, which includes 6.6 lb. of meat and five litres of milk daily, he has no health issues. “I don't have any medical conditions. I am absolutely fit and comfortable with my weight.”

The Pakistani star came into the limelight after videos of him pulling a tractor with  rope went viral. He aspires to be the world's strongest man. “I started gaining weight in my teens but I realised that I wanted to get into weightlifting and strongman championships. So I continued to put on weight.”

Regardless, the star continues to receive lots of love and affection from people.