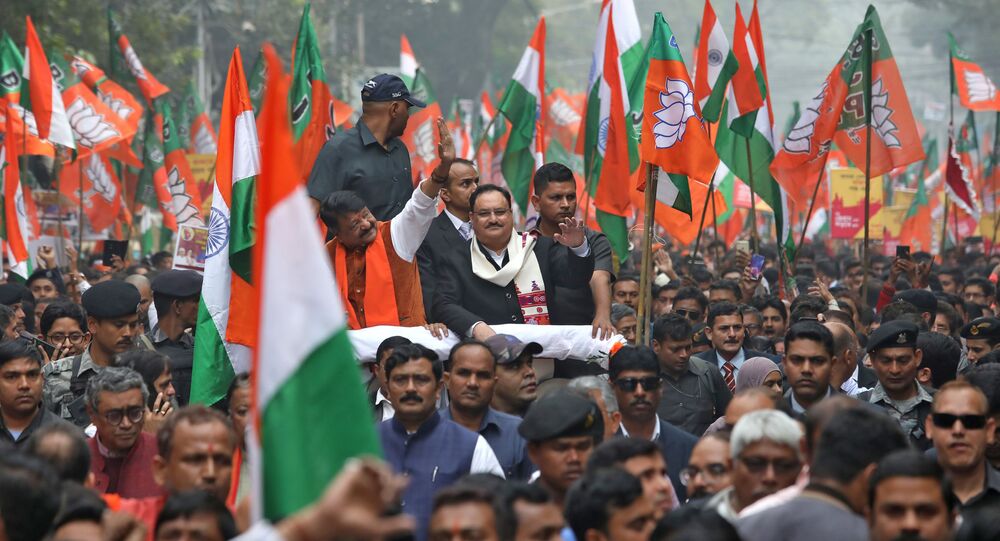 New Delhi (Sputnik): A change of guard was imminent in India’s ruling nationalist Bharatiya Janata Party (BJP) after Amit Shah, who was the party chief until now, took over as the federal Home Minister in the ministry headed by Prime Minister Narendra Modi in May 2019.

After almost eight months of holding the additional responsibility of party chief, Amit Shah made way to a new chief, Jagat Prakash Nadda, who was elected unopposed on Monday.

Nadda, who was the federal Health Minister during Modi’s first federal ministry term, was dropped during the second term and made working president of the party, before being elevated to head of the organization.

​Nadda is often regarded as the third most important person in the national party after Prime Minister Narendra Modi and Shah.

On being elected as the new party president, Nadda said: "A simple worker like me, who didn't have a political background, who hails from a remote place in Himachal Pradesh (state) - if someone like me is being given this responsibility then it is the speciality[sic] of the BJP and it is possible only in the BJP."

Modi and Shah congratulated the new party chief and hoped, the BJP would “scale newer heights during his Presidency”.

Nadda was born on 2nd December in 1960 in Patna, the state capital of Bihar. He completed his Bachelor of Arts degree at Patna University and went on to become a lawyer after graduating from Himachal Pradesh University. Inspired by Jayaprakash Narayan, an Indian Independence activist, Nadda joined student politics, becoming a member of Akhil Bharatiya Vidyarthi Parishad (ABVP), the student wing of Hindu nationalist Rashtriya Swayamsevak Sangh and later going on to become the National Secretary of the ABVP in 1989.

In 1991, Nadda was appointed the National President of the BJP Yuva Morcha and was re-elected in 1993.

Taking over from Amit Shah, the new BJP president will have a slew of challenges ahead, the most urgent being steering the party to victory in the upcoming elections in the national capital Delhi scheduled for 8 February. The BJP has not been in power in Delhi for the last 20 years.