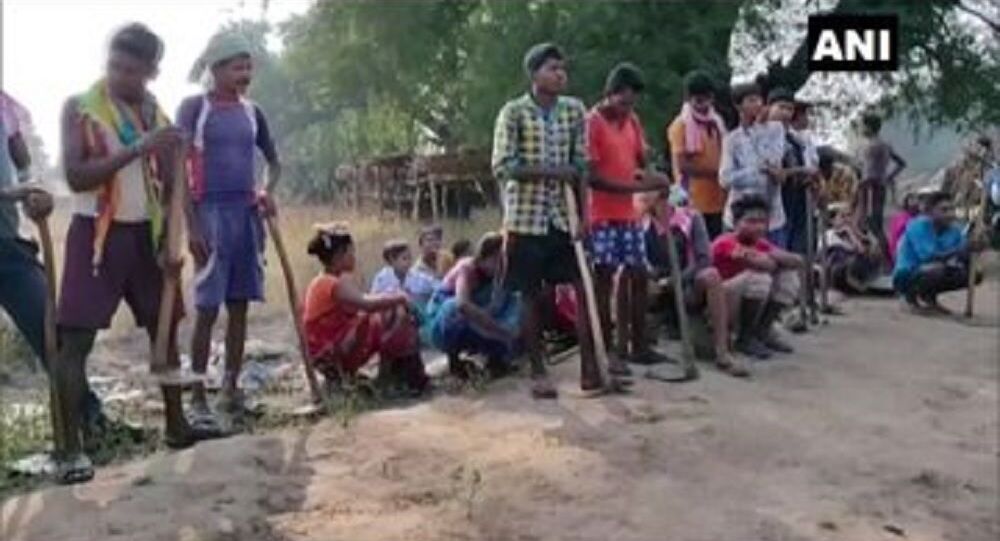 New Delhi (Sputnik): Several tribal regions of central India are affected by Naxals: left-wing militant extremists who identify as Maoist revolutionaries. The militants purport to champion the rights of the residents of these underdeveloped, forested rural regions and accuse the government of exploiting their natural resources.

Villagers of a Maoist-affected village in Sukhma district of central India’s Chhattisgarh state have taken it upon themselves to build a road for connectivity with public facilities like schools, marketplace, hospitals.

The top official of the district however, said on Monday construction work for the road was already underway under a government-funded scheme, but “it's good if locals are contributing in development work."

Chhattisgarh:Locals of Naxal-affected village
Palamadgu in Sukma build road themselves for better connectivity.District Collector says,“Road construction work is underway under National Rural Employment Guarantee Act. But it's good if locals are contributing in development work" pic.twitter.com/nR7LbMtExu

​This is not the first time villagers in Chhattisgarh’s Maoist-affected regions have helped themselves to enhance connectivity in the region. The state police and villagers in Kanker district of the state came together to construct a road on rocky and steep terrain in a dense forest in 2018.

This road project was taken up to help villagers and children to gain easy access to the weekly markets and schools, respectively.

Sukhma district has witnessed one of the deadliest Maoist attacks in the same year – 9 personal of a federal police force, Central Reserve Police Force (CRPF) were killed and two injured in an IED blast that destroyed even their mine-protected vehicle.

In response, nearly 37 Naxals were killed by the state police in a direct face-off which continued for nearly four hours at the borders of the state with neighbouring Maharashtra.

Meanwhile, the Asian Development Bank said in a statement that the road development project in Chhattisgarh with the $350 million loan would focus on rehabilitation and upgradation of state highways and major district roads. This would enhance villagers’ access to improved connectivity and livelihood opportunities.

Several districts in Chhattisgarh and neighbouring states are affected by Maoist extremism. According to Chhattisgarh Police, in 2019 as many as 79 Naxals were killed in 116 encounters with the security forces of the state, while 22 security personnel also lost their lives, in addition to 46 civilians. During the period, 484 Naxals surrendered and 308 were apprehended by the security forces.

The federal Home Ministry contends that Maoists are Left Wing Extremists with the “aim to overthrow the existing democratic state structure with violence as their primary weapon…and plan to usher in a so-called ‘New Democratic Revolution’ in India”.