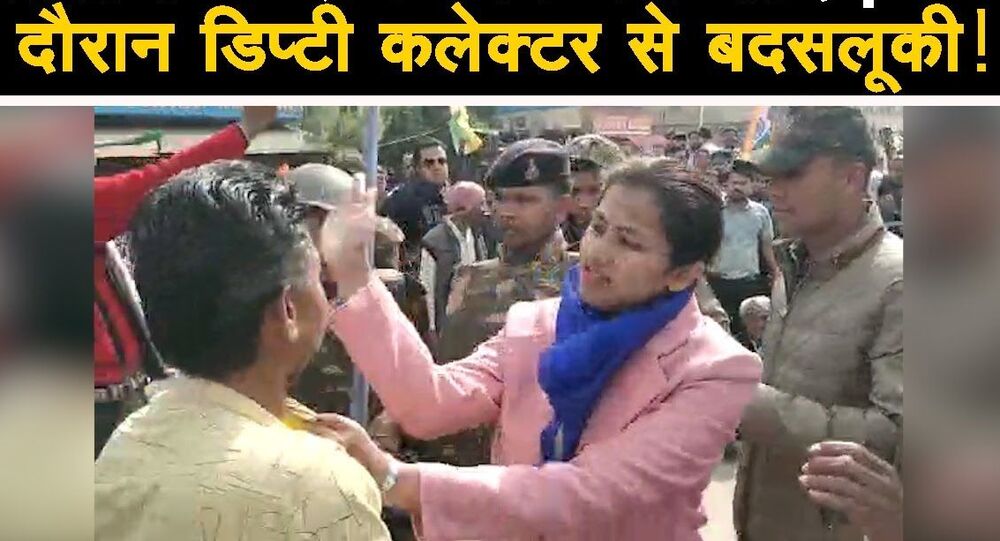 New Delhi (Sputnik): A key bureaucrat in India’s central state of Madhya Pradesh was assaulted during a rally in support of the controversial citizenship law on Sunday (19 January). A video of a protester pulling the hair of the young officer, Priya Verma, went viral after the incident.

Netizens were divided on social media, with some supporting and others against the official, Priya Verma, who was seen slapping an “unruly” protester and subsequently getting heckled during a rally organised by the federal ruling Bharatiya Janata Party (BJP) in Raigarh district of Madhya Pradesh. BJP is in opposition in the Madhya Pradesh legislative assembly.

Verma along with police were trying to disperse the rally in support of Citizenship Law, as it was held without the required permission, and defied prohibitory orders in force.

Hashtag #Terminate_Priya_Verma is trending on twitter as social media users slammed her for what they said and abuse of power, while others called it a publicity stunt and criticised her.

Priya Verma (SDM of Rajgarh, MP) is snatching away Tiranga🇮🇳 from the peaceful gathering in support of CAA & NRC.
Isn't it an attack on FOE?
We demand #Terminate_priya_verma from her services as such officers are dangerous for our integrity & sovereignty. pic.twitter.com/6INvbV8r8S

Q. What is the thing you did for free and Cheap Publicity?

Priya Verma:. I slapped a peaceful protestor. And then I played Women Victim Card.#Terminate_priya_verma#PriyaVerma #Shame pic.twitter.com/hbu7lXqJwz

#PriyaVerma this is clear abuse of power,ABLA NARIS are doing on daily basis coz they know no action vl be taken against them
What if someone wud have slapped her in return,she would played victim card
What precedence is she trying to set?
Demonstrated 'arrogance', must be sacked pic.twitter.com/jC7VlzC7fj

Found a camera on roll, start drama by thrashing random protester and get publicity by Sickularists and Uneducated or confused Muslims who trend #प्रियावर्माजिंदाबाद @HMOIndia #Terminate_priya_verma https://t.co/duvVjiruGA

However, other twitter users came out in support of the female official, hailing her as "brave".

Here is complete story of #PriyaVerma see how these sanghi goons pulled her Hair what a shame and they are trending #Terminate_priya_verma but I say #प्रियावर्माजिंदाबाद Good Morning All !! pic.twitter.com/bypi5ikW0Y

#ISupportPriyaVerma
Shame On BJP & RSS Workers For Misbehaving With Deputy Collector #PriyaVerma In #IndiaSupportCAA Rally In #Rajgarh In #MadhyaPradesh.

A FIR (First Information Report) was registered against two people, one of whom was arrested for allegedly hitting government official Priya Verma after a pro-citizenship Amendment Act rally took a violent turn, reported ANI.

Verma informed news agency PTI that some protesters had misbehaved with her. "Prohibitory orders under Section 144 of the CrPC are in place in the district. While we were doing our duty, a crowd came from the other side and misbehaved with us," she added.

There have been widespread protests in India against the controversial Citizenship Amendment Act (CAA), which grants Indian citizenship to persecuted non-Muslim immigrants, namely Hindus, Christians, Jains, Buddhist, Sikhs, and Parsis from Afghanistan, Pakistan, and Bangladesh.

The opponents of the law insist that it is discriminatory and presents a volatile view of the country’s Constitution. On the other hand, Prime Minister Narendra Modi and federal Home Minister Amit Shah had clarified that the law was not directed against any Indian citizen. The government and the ruling national Bharatiya Janata Party has organised countrywide campaign in support of the law.