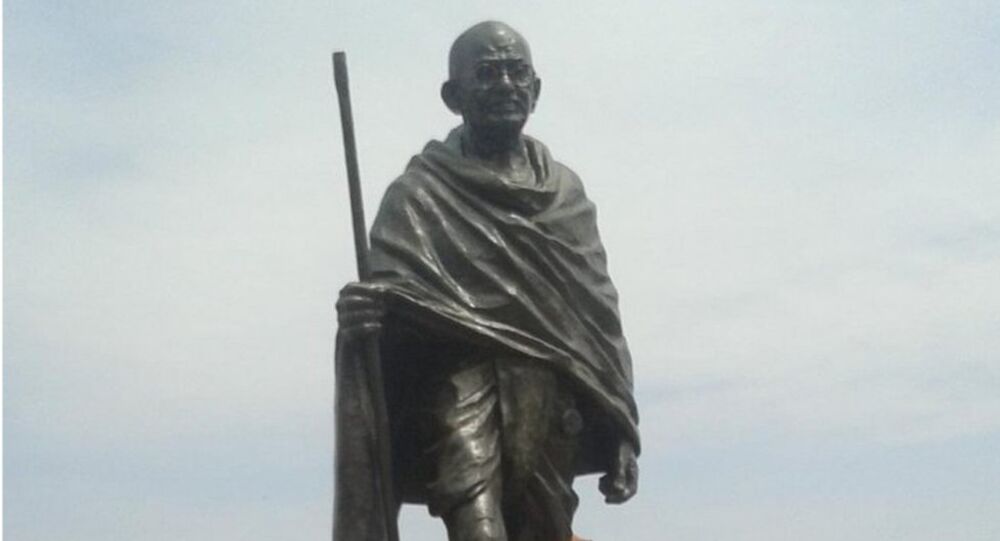 New Delhi (Sputnik): Instituted on 2 January 1954, the Bharat Ratna is India’s Highest Civilian Award. Originally limited to achievements in the field of arts, literature, science, and public services, it’s sphere has expanded to include all types of human endeavours.

India’s Supreme Court on Friday refused to issue any directive to the federal government to confer the nation’s highest civilian award -- Bharat Ratna -- on India’s freedom struggle icon Mahatma Gandhi, who is also regarded as the Father of the Nation.

A three-judge Bench of the apex court, headed by Chief Justice S.A. Bobde, hearing a plea from a petitioner to ask the government to confer the Bharat Ratna on Mahatma Gandhi, observed that Gandhi is the ''Father of the Nation'' and people hold him in high esteem which is far beyond any formal recognition.

"We share your sentiment, but it is a matter of policy. Make a representation before government", Chief Justice Bobde said while refusing to entertain the petitioner’s plea.

The chief justice also said Mahatma Gandhi is much higher than the Bharat Ratna.

One group of netizens came out in support of the petitioner, saying that Mahatma Gandhi was a deserving candidate for the Bharat Ratna, given his landmark efforts in securing the independence of India and its citizens from British colonial rule.

​Renuka Satark further said: "Are you crazy. Please, someone, give the petitioner a book about India's Independence movement and struggle. Tell him who was Bapu (Mahatma Gandhi). He should remember Gandhi with his heart and soul, not by conferring awards."

Sir so was Pt jawaharlal nehru and indira gandhi ...I have so much respect for them ...But then they got Bharat Ratna and mahatma gandhi was forgotten by gandhi family themselves..They r running congress party on gandhi sir name yet never thought of Bharat ratna for mahatma

Bharat Ratna for #MahatmaGandhi... SC refuses to issue any directive to the Centre...
SC observes : Mahatma Gandhi doesn't need any formal recognition. He is the father of the nation. He is far beyond these recognitions...
People hold him in very high esteem...

Designation is not important for #Bapu

Another group of netizens, however, said Gandhi was undeserving of that recognition as he was squarely responsible for the partition of the Indian subcontinent in 1947 and for the trust deficit that exists between India’s two major communities – Hindus and Muslims.

yes, killing millions of Indians in 1947 due to partition

It may be recalled that last year while releasing its manifesto for general elections, India’s ruling Bharatiya Janata Party (BJP) had announced that if it returned to power, it would take steps to confer the Bharat Ratna on the nationalist and Hindu ideologue V. D. Savarkar.

That announcement was criticized by Mahatma Gandhi’s kin, including his great-grandson Tushar Gandhi, who said conferring the award on Savarkar would be a great insult to all the martyrs and freedom fighters who sacrificed their lives and faced torture for India’s independence from the British.

Many in India still believe that Savarkar played a role in Mahatma Gandhi’s assassination on 30 January 1948 and feel that his acquittal in the case related to that incident, owing to lack of evidence, was a travesty of justice.