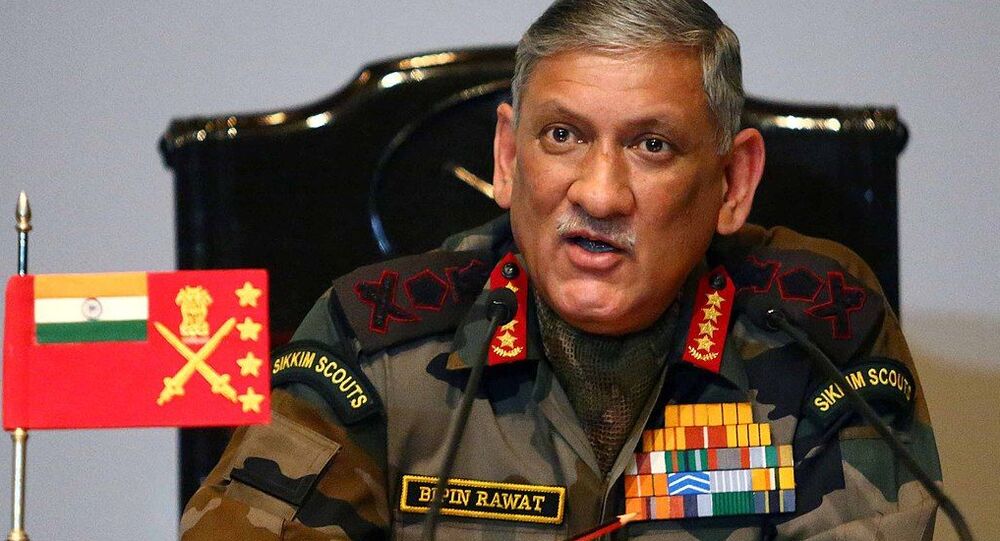 Participating in the annual multilateral Raisina Dialogue-2020 in New Delhi on Thursday, General Rawat said that the war on terror was nowhere near its end and added that there was an urgent need to understand the roots of this global menace and tackle it with a firm hand.

Indirectly targeting Pakistan, which India sees as a country that promotes terrorism from its soil, General Rawat said: "The war on terror is not ending, it is something which is going to continue, we will have to live with it until we understand and get to the roots of terrorism."

Rawat further observed that countries around the world need to learn from the US experience of dealing with terror with an iron hand in the aftermath of the 11 September 2001 terror attacks that claimed nearly 3000 lives; maimed over 25,000 and damaged property worth over $10 billion.

"We have to bring an end to terrorism, and that can only happen the way the Americans started after the 9/11 terror attacks. They said let's go on a spree, on a global war, on terror. To do that, you have to isolate the terrorists, and anybody who is sponsoring terrorism has to be taken to task," India's top military functionary said.

Radicalisation is happening in schools, universities and religious institutions, he further claimed, adding, "terrorism is here to stay so long as there are going to be states (Pakistan) that are going to sponsor terrorism."

"If they are going to use terrorists as proxies, make weapons available to them, make funding available for them, then we can't control terrorism," General Rawat warned.

The general lauded the Paris-based Financial Action Task Force (FATF), the inter-governmental organisation, for its efforts in combating money laundering and terror financing.

He said: "We need to isolate terrorism. You cannot have countries which are partnering with you in the global war on terror and yet are sponsoring proxies and terrorism. For this, international messaging has to go - like blacklisting by the FATF - it was a good measure. Diplomatic isolation, you have to do this."

General Rawat's comments assume significance in the wake of the FATF repeatedly putting Pakistan on notice and applying diplomatic pressure to encourage Pakistan to deliver on combating terrorism allegedly emanating from its soil. Islamabad has been given time until the middle of February to hand over a progress report on this front.

India, China Ready to 'Stand Shoulder to Shoulder' Against Terrorism 'Plaguing the World'