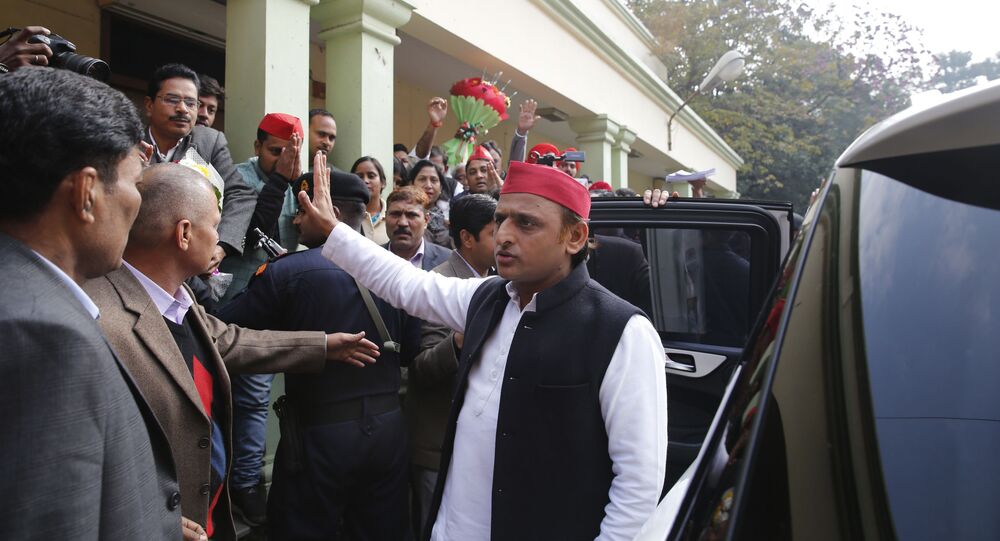 'Go Away': Indian Opposition Party Chief Lashes Out at Doctor over Compensation - Video

New Delhi (Sputnik): The former Chief of India’s Uttar Pradesh state faced criticism for misbehaving with a doctor on duty, and arrogantly demanding him to leave the hospital ward as he was a government employee.

President of the regional Samajwadi Party (SP) and former Chief of northern Uttar Pradesh Akhilesh Yadav was visiting patients injured in a bus accident that killed at least 20 people, when he was captured on camera, lashing out at an on-duty-doctor.

Yadav was reportedly irked when the family of the bus accident victims asked about the non-payment of promised compensation and the doctor in question intervened.

"You are a very junior officer... a very small worker. You could be from the RSS... you could be from the BJP. You can't tell me what they are saying... you don't have to speak on behalf of the government. Step back... step further back. Go away from here..." Yadav shot back as camera recorded him.

#WATCH Former CM Akhilesh Yadav who went to meet injured of Kannauj accident, at a hospital in Chhibramau asks Emergency Medical Officer to leave the room as he speaks about compensation amount been given to the injured,says, "Tum sarkar ka paksh nahi le sakte...bahar bhaag jao". pic.twitter.com/U3DrdHI1se

The opposition party leader seemed to be annoyed as the doctor tried to correct the family by saying, they had received the compensation.

The doctor, D.S. Mishra, was quoted by news agency ANI clarifying that he was standing there as he was the attending officer.

“When the family of the patients claimed that they did not receive their compensation, I tried to clarify that they have received the cheques," Dr. Mishra said, adding that Yadav had asked him to leave even though he was on emergency duty.

Chief of the state Yogi Adityanath had announced Rs. 2 lakh compensation for the families of those killed in the accident and Rs. 50,000 (approximately $706) for those who had suffered grievous injuries.

Yadav's Samajwadi Party had also announced a compensation of Rs. 20 lakh to the families of those who lost their lives in the mishap.

On January, at least 20 people died and several were injured when a bus carrying 46 passengers collided with a truck in Uttar Pradesh's Kannauj district. The bus was engulfed in fire, and 21 passengers were rescued and taken to hospital.