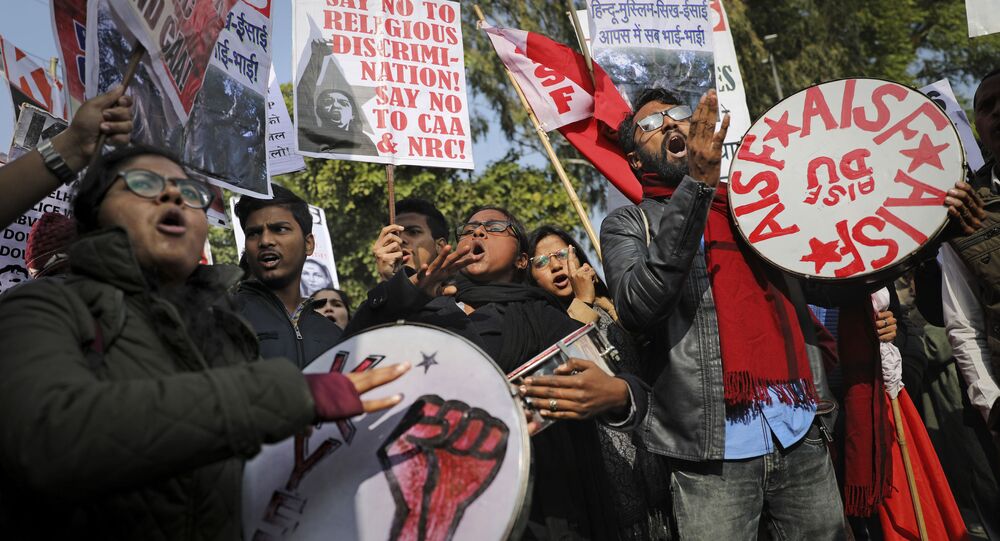 New Delhi (Sputnik): On Sunday, the Students’ Union leader from Jawaharlal Nehru University (JNU) and over a dozen students were hospitalised following an attack by a few masked miscreants who barged into the university campus and attacked students.

Students from Jawaharlal Nehru University (JNU) have sought intervention from India’s Education Ministry’s in the police complaints and probe initiated against them by the university authorities, the university’s students’ union chief said on Friday.

“We have sought HRD Ministry's intervention in FIRs and proctorial inquiry initiated against us by university admin", JNUSU leader Aishe Ghosh told the media.

Two FIRs have been registered by the Delhi Police against Ghosh and a few other students for separate incidents (3rd - 4th January) that occurred before Sunday evening's attack in which unidentified masked people barged into the campus and assaulted students with iron rods and batons.

Regarding the case in which the two FIRs were filed, the university has alleged that the students’ union group, reportedly associated with community ideology, was preventing students from registering for the Winter Semester as a mark of protest against the university’s recent decision to hike fees.

In the process, a few “goons” entered the Centre for Information (CIS) and vandalised the room attacking the security guards. JNU's Security Department told police the act was committed by an administrative unit of the university. As a result, a FIR was filed against Ghosh and eight other students.

The second FIR was filed for manhandling and threatening the guards against re-opening the CIS room and continuing with the registration process.

Meanwhile, the protesting students from JNU have been demanding the resignation of the University’s Vice Chancellor Prof. M. Jagadesh Kumar. After a meeting with officials from the Education Ministry on Thursday, Ghosh said the students and faculty will not relent until the Vice-Chancellor of the university is sacked.

In another development, Ministry of Human Resource Development (MHRD) Secretary Amit Khare announced a rollback of the fee hike announced by the university and asked the University Grants Commission (the body responsible for maintaining education standards in the country) bear the cost of service and utility charges.

The ministry has now urged the students to stop protesting.

“Thousands of students are coming forward to register for the winter semester exams. The University administration is very flexible and every step is being taken to facilitate the students. A favourable environment is there in the university and I urge students to be back", the Vice-Chancellor said on Friday.

“Now there are no Service & Utility charges, students only have to pay room rent, which is Rs. 300 ($4). The money taken from students will only be utilised to improvise facilities in the campus".

Thousands of students have been staging demonstration against the Draft Hostel Manual of the University, which stipulates fee hikes. The students held a protest march to Parliament that resulted in clashes with police.