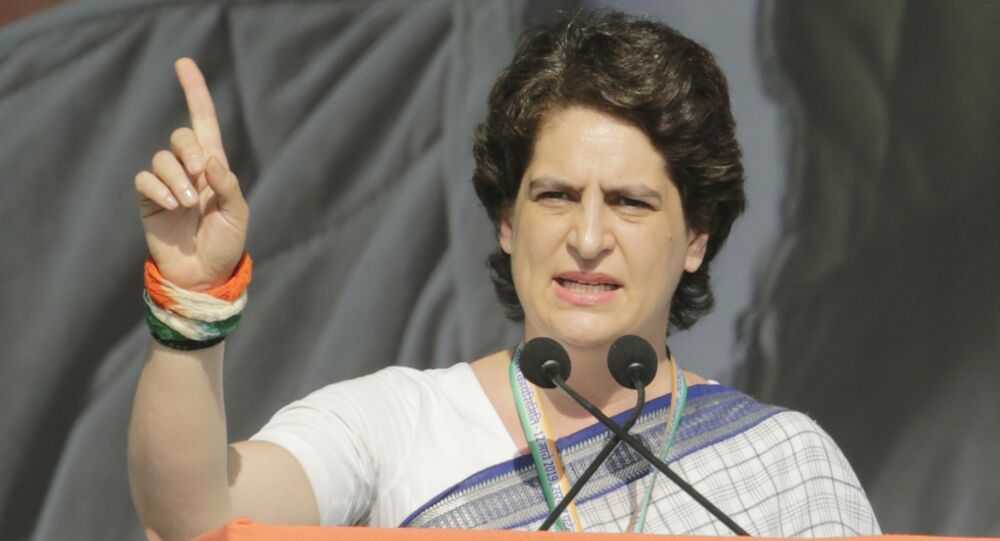 New Delhi (Sputnik): The Indian state of Uttar Pradesh witnessed large-scale violence and clashes over the contentious Citizenship Amendment Act (CAA) between protesters and police, leaving many injured and arrested as public property was also damaged at several places during the demonstrations.

Priyanka Gandhi, the daughter of the chief of India’s main opposition party Congress, on Friday interacted with students of Banaras Hindu University (BHU) and met other protesters of the Citizenship Amendment Act who were put behind bars by the Uttar Pradesh state government.

She is undertaking a visit to Prime Minister Narendra Modi’s parliamentary constituency, Varanasi, in the state.

​She visited the Sant Ravidas temple in Raj Ghat, Varanasi, and held interactions with members of the Congress and civil society members who were held by police during the CAA protests.

"The protestors were holding a peaceful agitation", she said. The Congress member also met the activist couple Ekta Shekhar Singh and her husband Ravi Shekhar. They were also held by the police during protests.

"I feel proud that they struggled and raised their voice for their country. Whatever the government is doing is anti-constitutional”, Priyanka told media.

She was scheduled to later visit Jaipur city in another Indian state of Rajasthan.

During the anti-CAA protests, Uttar Pradesh witnessed state-wide clashes, with 1,113 protesters being arrested for instigating violence. According to India’s Home Ministry, some 19 people lost their lives and 288 police personnel were injured. Nearly 327 police complaints were lodged.

Different parts of India have witnessed massive protests against the CAA, which grants citizenship to non-Muslim immigrants who fled persecution from Afghanistan, Pakistan, and Bangladesh. It allows Hindus, Sikhs, Parsis, Christians, Buddhists, and Jains to be granted Indian citizenship if they arrived in India on or before December 2014.

Man Breaches Security to Approach Congress Politician Priyanka Gandhi; She Listens to Him