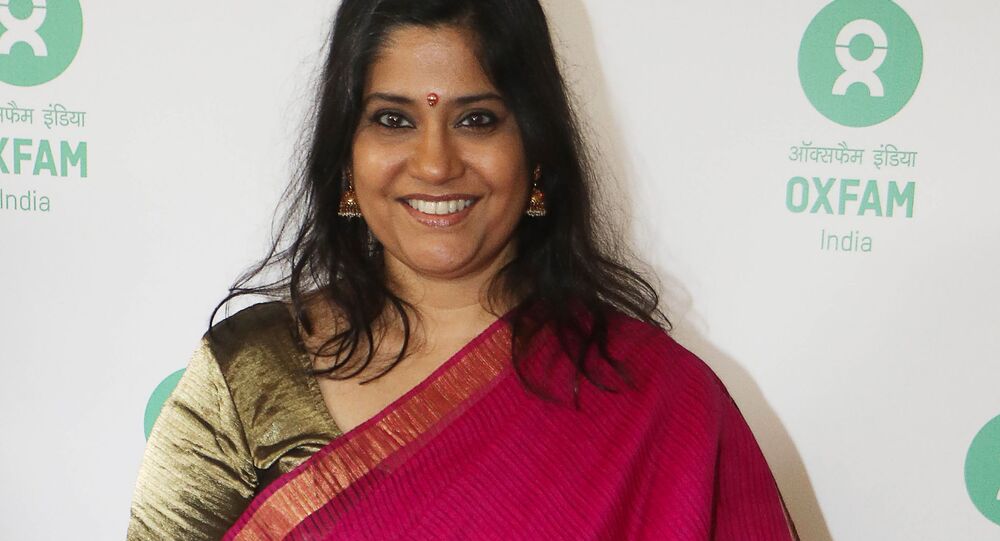 'Most Think We Should Just Act and Shut Our Mouth': Bollywood Actress Participating in JNU Protest

New Delhi (Sputnik): Many Bollywood celebrities such as Anurag Kashyap, Taapsee Pannu, and Richa Chaddha have openly voiced their opinion about an attack on students from the premier Indian university JNU who have been demonstrating on campus over various issues, including fee hikes since October.

Some students also took to the streets to protest against a controversial Citizenship Amendment Law passed by the Indian government. The law seeks to grant citizenship to illegal immigrants from three neighbouring countries, but bars Muslims from this amnesty.

Popular Indian actress Renuka Shahane has said she fails to understand why the government is focusing on dividing the country along religious lines with the CAA, especially at a time when the Indian economy is in shambles.

She also appreciates those who are coming out and speaking up.

“Bollywood is not separate from society or let’s not even call Bollywood or Hindi film industry or the Indian film industry because when we talk about Bollywood, we leave out the range of people who are from West Bengal, Punjab, South India, and people from different professions who have come out in the open and voiced their opinions", said Renuka.

Most recently actress Deepika Padukone visited to express solidarity with injured JNU President Aishe Ghosh and this move by the actress received both appreciation and flak on social media as many called it a promotional stunt for her film "Chhapaak", released on Friday.

Renuka says that people talk only about Bollywood as if they are the ones who elected the government.

“We are as diverse in Bollywood as we are in our country. We are the citizens of our country much more than the professions we belong to. We might be in the glam world but that doesn’t mean we are not common citizens of this country", she said.

“Most people think that we should only act in movies and shut our mouth otherwise and that’s ridiculous because the expectation that we should only entertain and come home and that we are not thinking or living individuals is really sad", added the actress who was in the news recently for her straightforward response to Prime Minister Narendra Modi, for asking his IT cell Twitter handles from staying away from spreading rumours and falsehood as she feels they are totally against brotherhood and peace.

She said one has to get out of that bubble basically and “look at all of us as citizens and much more than Bollywood”.

“I would say that industrialists are speaking out and I believe they are the last people to speak out as they are always pro establishment so I think this is the time so come on wake up and smell the coffee", she said.

In a career spanning almost a decade, Renuka has starred in hit films in different languages while performing with Bollywood stars like Salman Khan, Madhuri Dixit, and Preity Zinta.

She was recently trolled on the internet after she spoke about the Narendra Modi government's IT cell for posting alleged hate messages.

She feels that the government's policies have disturbed the country and using force on students is not right.

“You cannot use the kind of force that we have seen this time on students, it’s ridiculous", said Shahane pointing at the recent attack on students inside the Jawaharlal Nehru University campus by masked goons.

“Why suddenly an elected government becomes some sort of autocratic thing that if you not with me, you are against me. It’s not a question of that. We all want the betterment of our country and to label all those who oppose the law as anti-nationals and people who are trying to break up India is not right", she added.

When asked what the solution to all this anger and hatred is, Renuka said: “We do not want the policies. We do not want this exercise to happen in our country because I do not feel that this is the right time for it to happen because our economy is in a shambles, so we should be concentrating on doing much more for our citizens rather than dividing them".

“Our heart goes out to all persecuted minorities in all countries but at the same time why should you then make our citizens suffer?” she said, adding as a mother she is also worried because she doesn’t want her children to grow up in an India that is divided by hate.