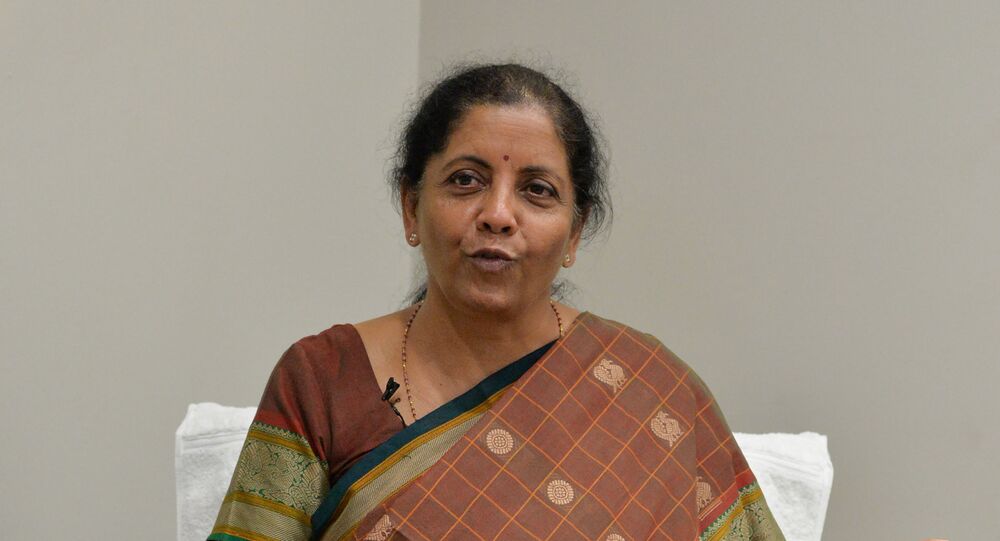 New Delhi (Sputnik): Indian Prime Minister Narendra Modi has announced that the country will become a $5 trillion economy by 2025. The size of the economy was $2 trillion when Modi took over in 2014 and has reportedly increased to $3 trillion. India’s Gross Domestic Product (GDP) growth has, however, touched a six-year low at 4.5 percent.

Less than a month into the Indian budget, Finance Minister Nirmala Sitharaman's absence from key industry consultations held by Prime Minister Modi has led to eyebrows being raised by many, including from the main opposition party Congress.

Like some of the previous meetings, Sitharaman could not be spotted in the latest meeting that the prime minister held with a section of economists on Thursday, despite her other cabinet colleagues being present on the occasion.

Modi has held a series of consultation meetings on the budget over the last 10 days, as well as on the plan to expand the size of the Indian economy to $5 trillion by 2025. Interestingly, the finance minister was not part of any of them.

According to sources, eight consultation meetings have already been conducted by the prime minister. On Thursday, Modi met a group of 39 economists in the presence of Vice Chairman of NITI Aayog – the Indian government’s top think tank.

Congress parliamentarian Shashi Tharoor raised the issue of the absence of the finance minister during key consultations, with responses pouring in.

Where is the Finance Minister? Or has the Duo forgotten they have one? https://t.co/990NEDyQp4

Tharoor did get a reply to his social media broadside against the Indian finance minister. The minister’s office tweeted that Sitharaman already had a meeting with economists on 20 December.

Sir, the minister has already met economists on 20th Dec 2019, as a part of the pre-budget consultations. https://t.co/pYMoqBbv35

Smt @nsitharaman interacts with the office-bearers, panelists, spokespersons, and members of the morchas and departments of @BJP4India in New Delhi, as a part of the pre-budget discussions. pic.twitter.com/9wkB8fOFFh