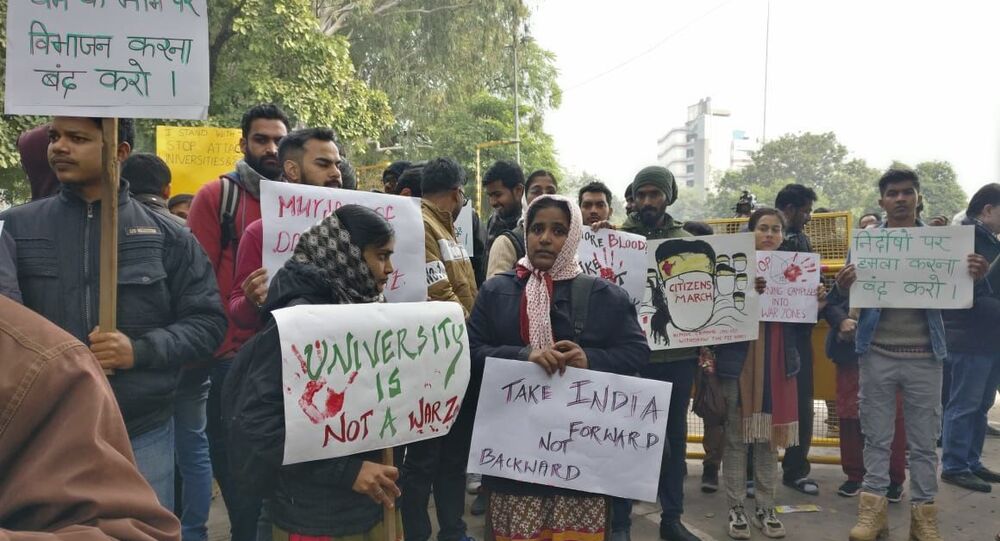 New Delhi (Sputnik): Dozens of students, teachers, and staff of a premier Indian university were attacked and injured by masked men and women on 5 January. Even though the Delhi Police have registered cases against several unidentified attackers, they arrested the student union leader of the university, who was one of the victims of the assault.

The attack at Jawaharlal Nehru University (JNU) has triggered protests across several universities in India and has been widely condemned, including by two federal ministers who are alumni of JNU.

On Thursday, students and teachers of various universities and colleges in the national capital attempted to carry out a protest rally from New Delhi’s Mandi House area to the office of the federal education minister. Delhi Police, however, barricaded and stopped the protesters ahead of the minister’s office.

The JNU students’ union had said: “Delhi Police is here to stop us. They, however, could not stop the ABVP terrorists during the JNU Attack. We are protesting the attack on our President, on our students and on our Professors. You should not have dared to attack JNU. We shall fight, we shall win”.

The protests come days after an incident at Delhi’s JNU, where mask-wearing people with sticks and rods attacked students. JNUSU President Aishe Ghosh and several others, including teachers, were left injured in the attack that was carried out on 5 January.

There were opposing claims about the identity of Sunday’s attacks. While students affiliated with Akhil Bharatiya Vidyarthi Parishad (ABVP) – a student outfit of Hindu nationalist Rashtriya Swayamsevak Sangh – alleged that it was orchestrated by rivals; opposing claims were also made by their "foes".

The police have also registered a complaint against Ghosh, who was badly injured during the attacks, and several others for vandalising university properties and attacking security guards.

The agitating students demanded the resignation of the university's vice-chancellor for jeopardising the security of students and teachers on campus. Delhi Police have also faced condemnation for their perceived inaction during the rampage.

Initial protests by students of JNU during the last months of 2019 were against a recent fee hike. After the resumption of classes post-winter break, the situation again became tense on campus, as a section of students stopped a new semester registration process without resolving the fee issue.