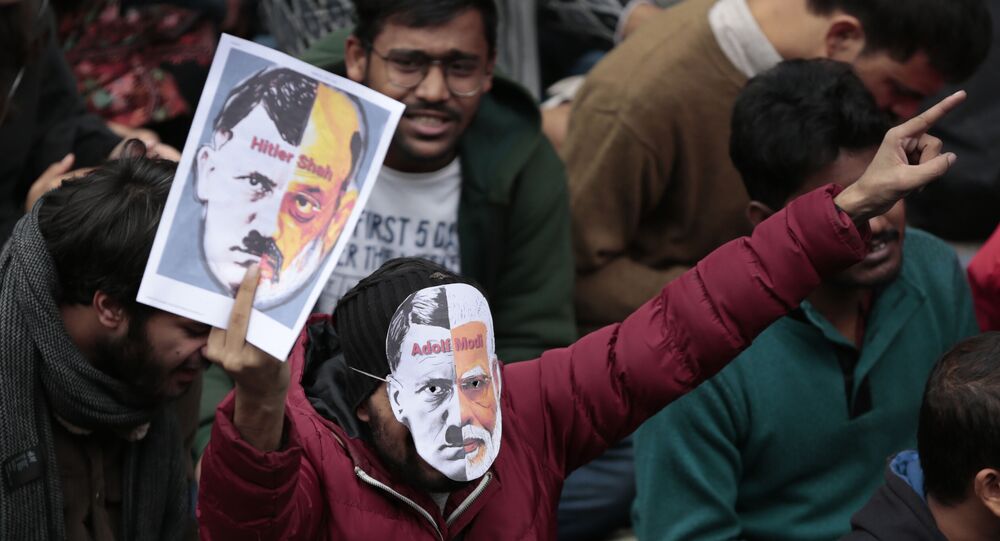 New Delhi (Sputnik): A top university in the Indian capital witnessed a bloody clash on 5 January when unidentified masked people broke into the campus. Dozens of students and teachers were injured, forcing police to stage a flag-march.

There has been wide condemnation of the attack in Jawaharlal Nehru University (JNU), as India’s federal governing Bharatiya Janata Party (BJP) and opposition parties blamed students’ unions affiliated to rivals for instigating the violence.

Indian-born Nobel laureate Abhijit Banerjee, himself an alumnus of JNU, has spoken out on the turn of events inside the university’s campus on Sunday evening when masked people attacked students and teachers, likening the situation to what happened in Nazi Germany.

Calling the incident a worrying one for the “image of the nation”, Banerjee urged the government to establish the “truth of what happened”.

“I think any Indian who cares about the nation’s image in the world should worry. This has too many echoes of the years when Germany was moving towards Nazi rule,” Banerjee, was quoted saying by News18.com.

“I am really concerned about those who were injured. I wish everyone injured a speedy recovery,” added Banerjee, recalling how he also faced police action in JNU back in 1983 during a students’ protest while doing masters in Economics. Charges against him were later dropped, he added.

Students having an allegiance with the SFI claimed that the violence was started by the Akhil Bhartiya Vidyarthi Parishad (ABVP) – the student wing of the BJP. ABVP, however, denied the charges and instead alleged the attackers were led by SFI activists. Delhi Police are investigating the matter.

JNU witnessed agitation by students for the past several weeks over hikes in tuition fee and hostel charges, among other things. Classes were resumed after the winter break on 1 January, but the situation again became tense over semester registration, according to a statement issued by the Registrar of JNU. Students wanted the fee hike to be reversed before the start of the registration process.

Banerjee, currently professor of Economics at Massachusetts Institute of Technology (MIT), was awarded the Nobel Prize in Economics in 2019 for his work on alleviating global poverty. He shared the Nobel Prize with fellow economists Esther Duflo and Michael Kremer.