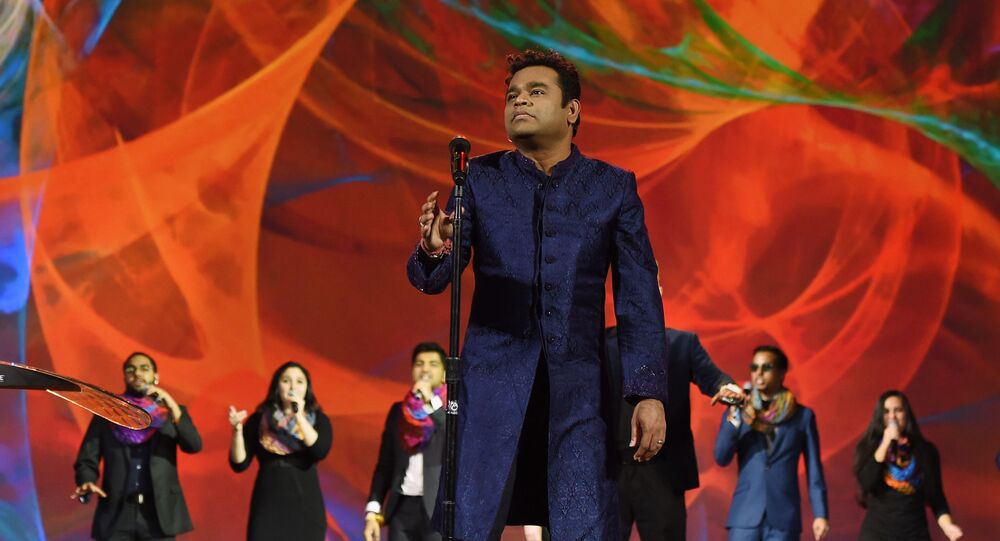 New Delhi (Sputnik): A. R. Rahman lost his music composer father when he was just 9, forcing his family to rent his music equipment to survive and introducing Rahman to the word “responsibility”. He started off his career as a small-time keyboard player but has since won major international awards.

As he turns 53 on 6 January, legendary Indian composer A.R. Rahman’s contemporaries find solace in the magic that he creates with his overwhelming and soulful music.

Resul Pookutty, a renowned sound designer, sound editor and audio mixer, who won the Academy Award for Best Sound Mixing for Dany Boyle’s “Slumdog Millionaire”- a film that also made Rahman the first Indian to win two Academy Awards in a single night, finds it unsurprising to observe the kind of acclaim the “Mozart of Madras” has received internationally.

“The kind of musical genius he is, it is natural for the world to recognise him. As an entertainer his name is being spread all across the globe as a very genuine and thoughtful and a name that a generation can follow and imbibe an inspiration from. In that respect, the name A. R Rahman is not just Indian name or inane persona but is a global personality,” says Pookutty.

“My association with him has always been very mutually respected. He is more than just a colleague for me.  As a friend and as a mentor, he has always been a call away. There are films that we have done together became global hits and super entertainers. And, there are films which we are working together again this year,” Pookutty told Sputnik.

Born as A.S. Dileep Kumar, Rahman switched to Islam with the name Allah Rakha Rahman in 1988 when his sister fell ill and was reportedly given a second life by a Muslim doctor.

Leaving a mark on music looked to be his destiny, as despite being a school dropout, Rahman managed to join Trinity College, London on a scholarship and went on to acquire a degree in western classical music.

As he was inclined towards composing and writing jingles, he worked with many advertising companies before getting his big break in 1991 by renowned filmmaker Mani Ratnam who invited him to work for his upcoming film “Roja” (1992). The movie was a massive hit and so was the music.

Rahman received the National Film Award for Best Music Direction in his first year in the movie industry. This opened doors for him and there was no looking back.

Pookuty believes that Rahman is someone who will evoke memory through music.

“I feel he is one of the persons in the industry, he would poke the memory of each one of us. For me, a sense of memory is (comes through) sound and sound is knowledge. That’s what the entire Indian ethos and philosophy tells me. Every time I hear a track that is done by him, I feel he is poking a sense of history and time in me.”

“Every time I am listening to him, his work, even it is old or new it evokes certain association in me. His work is truly global,” the acclaimed sound designer added.

Rahman has won six National Film Awards, 15 Filmfare Awards and 17 Filmfare Awards South. He has also been felicitated with India’s third highest civilian award Padma Bhushan in 2010. Globally, his work for “Slumdog Millionaire” earned him two Grammy Awards as well as a BAFTA and a Golden Globe.

In the industry, Rahman has given wings to new and aspiring singers and worked with many of them. His KM Music Conservatory has given some of the great singers for instance Qutub-E-Kripa who was shortlisted for the Best Original Song at the 2018 Academy Awards for Hollywood film “Lake of Fire's”.

Young star Aditya Kalyanpur, a Tabla Maestro who worked with Rahman, says it's always a learning experience working with him.

“He has always used Tabla so creatively in his greatest songs and to be able to perform that live with him was an incredible experience. His genius has created a beautiful amalgamation of several different genres of music and it’s wonderful that Tabla has been widely used by him.”

“It’s truly a mind-boggling experience to feel the fabulous energy and the magic he has on his audience. I wish him a very Happy Birthday and May God bless him with a long, healthy and musical life,” he told Sputnik.

Abhay Jodhpurkar, a playback singer was discovered by Rahman while singing some Qawwali lines during his music academy’s annual event. Soon, he was singing for Rahman’s “Kadal” film with Mani Ratnam and got a launch of his dreams!

“Singing for AR Rahman Sir for the first time was like meditation for me. The whole process of conceiving the songs' structure and building it up organically was just out of the world…he extracts the best out of you without you even realising it,” he said.