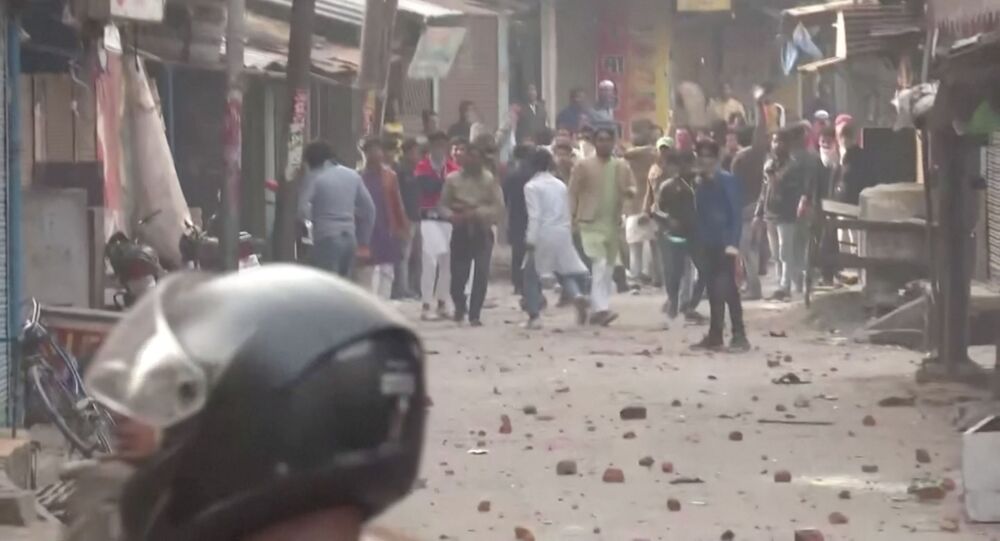 New Delhi (Sputnik): In the wake of widespread protests across India over a controversial Citizenship Law enacted in early December, Narendra Modi's Bharatiya Janata Party (BJP) has started reaching out to influential members of society to explain its stance on the new rule and immigration policy.

The Bharatiya Janata Party (BJP) has organized an outreach programme to rope in India’s Bollywood celebrities on Sunday to curb the circulation of misinformation on the Citizenship Amendment Act (CAA).

Federal Trade and Railways Minister Piyush Goyal and BJP’s National Vice President Bijayant Panda were the key speakers at the interaction held in western Mumbai, the hub of Bollywood.

Intended to be a star-studded dinner party, the event turned out to be a complete lacklustre affair, with no Bollywood biggie actually making an appearance.

The industry members who did show up at the event included actor Ranvir Shorey, singer Kailash Kher and me-too accused music composer Anu Malik among others; they met with raging protesters outside the venue.

Protesters conveyed their message to the Bollywood celebs who were present at the event, reportedly using placards that read – “Bollywood, we are watching” and “Do not disappoint your fans”.

Dear Bollywood... Students are getting beaten up by an armed, masked mob at JNU in the presence of police. Do check on your conscience while you sample the Paneer Pasanda and Chicken Tikka at the fancy dinner you are meant to be at in the next 5 minutes at Hyatt, Mumbai. pic.twitter.com/yJL2JhxhoP

Block every Bollywood trash who comes out of the “meeting” and supports #CAA. Also boycott all their movies and products featuring them in ads. If they want to divide the country, h!t where it hurts, their wallet & popularity #Bollywood

Those of you who post dinner pics tomorrow and don't speak against BJP, you have blood on your hands!#JNUViolence#JNUSU

Dear Bollywood,
All your privilege is waste if you can't stand up to the oppressor.

Yea. You're called for a dinner.
You go. You listen to propaganda.

But hope tonight, you don't get sleep. And plan how to play this from the good side.#FascistFilmFestival #BjpBribesBollywood

​Prime Minister Modi is known to have maintained friendly kinships with Bollywood’s prominent faces, including Shah Rukh Khan, Aamir Khan, Karan Johar and Akshay Kumar among others. But that apparently did not help drawing in many known faces at Sunday’s event.

Had a good meeting with popular film personalities.

Congratulations @priyankachopra and @nickjonas. Wishing you a happy married life.

The law, however, does not grant citizenship to Muslims from these three neighbouring countries, something that protesters and several opposition parties in the country see as a violation of the Constitution.