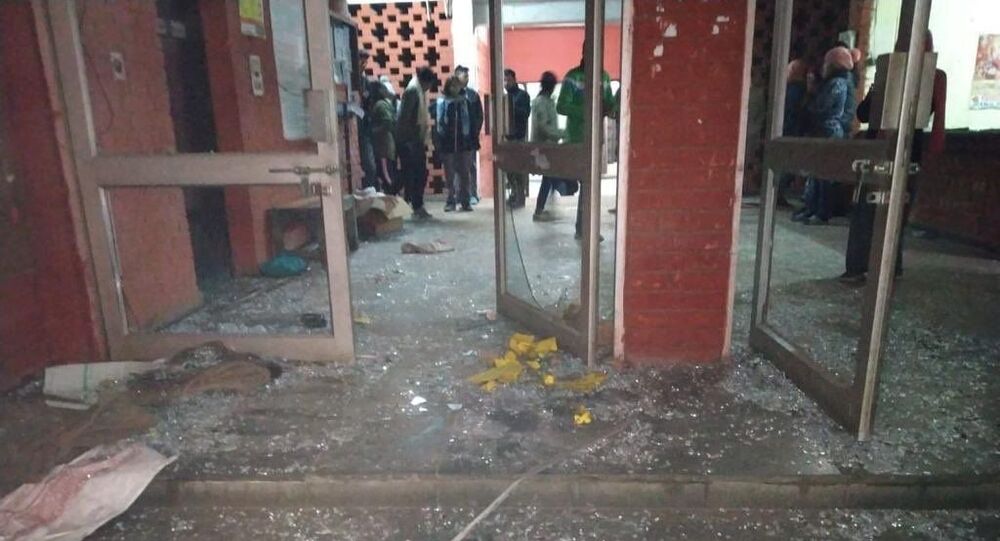 New Delhi (Sputnik): Several students and teachers at Jawaharlal Nehru University were injured when unidentified masked men attacked them on campus Sunday evening. Over two dozen people were admitted to hospitals. At least several of them were seriously injured by the masked men and women, who attacked them with iron rods and sticks.

While India’s major opposition parties have blamed the student wing of governing Bharatiya Janata Party (BJP) for violence, BJP hit back saying it was Communist Party and Congress Party goons who unleashed terror on the campus of Jawaharlal Nehru University (JNU) in New Delhi.

The ruling BJP condemned the violence at JNU and blamed it as “desperate attempt by forces of anarchy”.

We strongly condemn the violence on JNU campus. This is a desperate attempt by forces of anarchy, who are determined to use students as cannon fodder, create unrest to shore up their shrinking political footprint. Universities should remain places of learning and education.

The brutal attack on JNU students & teachers by masked thugs, that has left many seriously injured, is shocking.

The fascists in control of our nation, are afraid of the voices of our brave students. Today’s violence in JNU is a reflection of that fear.

​Meanwhile, demands for the resignation of India’s federal Home Minister Amit Shah started trending on social media, as netizens alleged that the Delhi Police, directly under the administrative control of Shah, had failed to act to quell the violence on time.

Shah, for his part, has asked the Lieutenant Governor of Delhi, Anil Baijal on Monday to convene a meeting of the representatives of the university for talks.

​Delhi Police have registered a First Information Report (FIR) for the violence on Monday. Reports also indicate that the injured students have been discharged from the hospital.

There have been several videos on social media, which showed masked youths brandishing sticks roaming around the university, as there was a lack of security inside the campus.

Shocking to see masked vigilantes with rods walking about as @DelhiPolice merrily watches them go by. Elsewhere cops have opened fire with lethal consequences for lesser provocation. Top cops and their political bosses need to explain why police took no action against goons. pic.twitter.com/sWXpMl7vWF

​Police have stated that the violence was the result of fight between two groups on campus. Some reports suggest that violence erupted after left-wing students were discouraging students on campus from registering for next semester as a means of protesting against the administration.

“However, when students didn’t adhere, there was a scuffle which led to the attack,” say the reports.

JNU administration issues a statement blaming University students who are boycotting the ongoing registration (which means JNUSU) for beating those who are registering. pic.twitter.com/9eL0eoQbVW

​Netizens decried the incident, saying it was as police failure and demanded the resignation of Federal Home Minister Amit Shah.

Hinduism is about -love,prosperity, Moksha,Dharma and soul.Nt about this brutality in the name of Hindutva. As an Hindu I'm felling very shameful because of what yesterday happened in #JNU n what's happening in country from last 6 years #JamiaProtest #JamiaMilia #ResignAmitShah pic.twitter.com/ueZzvcW2yc

Name the political boss of Delhi Police @rahulkanwal.
It's the Tanashah @AmitShah.
You guys heckle Opposition leaders by name.
Pl DEMAND a PC by the Home Minister where he has to face unscripted questions from a free press. #JNUUnderAttack #ResignAmitShah #JNUBleeds https://t.co/nXK28NnzAg

​The JNU violence was reflected in other Indian cities on Monday. People gathered at western Mumbai’s landmark Gateway of India and also in the campus of Hyderabad University. There are also reports of planned protests in eastern Kolkata, Central Bhopal, western Ahmedabad and southern Bengaluru to condemn the attack.

The Northern Indian state of Uttar Pradesh, which has been boiling over protests against the controversial Citizenship Law and attack on Nankana Saheb Gurudwara in Pakistan, has been put on high alert following the JNU violence.

​Meanwhile, influential personalities have condemned the attack on the campus of the premiere Indian university.

Campuses are places for learning, discussion, collegial debate amongst diverse opinions, and research. There is no place at all for violence. What has happened in JNU today is unhesitatingly and unequivocally condemned. I hope peace and good sense is restored soonest.

​Students at Jawaharlal Nehru University were protesting against the fee hike in the last months of 2019. After the resumption of study following thewinter break, the situation has again become tense on campus and some students are leaving campus.