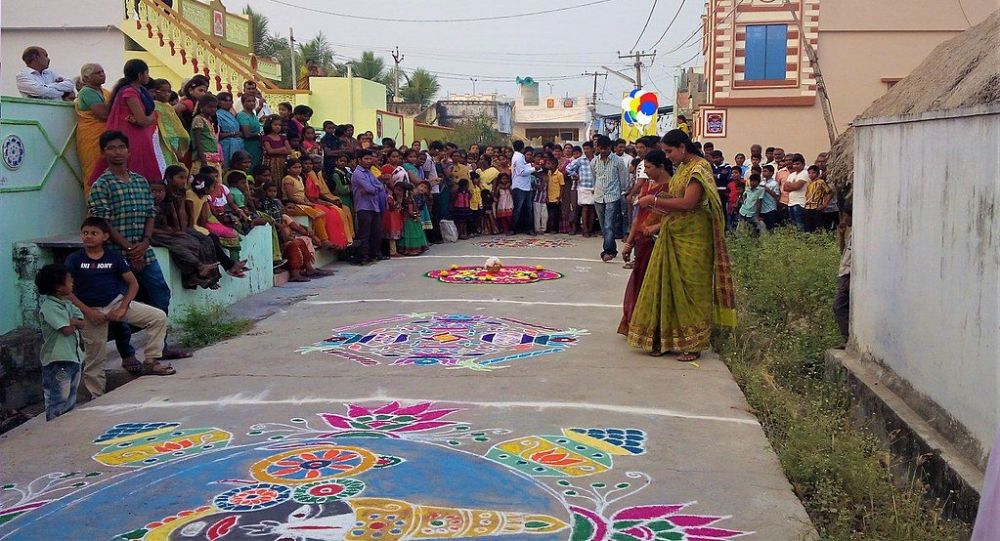 New Delhi (Sputnik): People in the city of Chennai, Tamil Nadu have adopted an artistic way of raising their voice against the Citizenship Amendment Act (CAA), filling up the streets with Rangolis, India’s traditional sand art.

Female supporters of India’s main opposition party Congress clashed with police in the country’s southern state of Tamil Nadu on Tuesday during a protest against the contentious Citizen Amendment Act (CAA) and a proposed National Register of Citizens (NRC) using artistic "Rangolis".

The specially made colourful Rangoli designs said “Say No to NRC (National Register of Citizens), CAA”.

Tamil Nadu: Scuffle breaks out between police & Mahila Congress supporters at State Congress Office in Chennai, while they were protesting against #CitizenshipAmendmentAct by making rangoli. pic.twitter.com/kruMVPeoZ8

“The implementation of NRC and the CAA is not only a threat to Muslim community but everyone", she added. “In order to convey our solidarity with protestors who have been demonstrating against the new law, we will continue our protests until the government withdraws NRC and the CAA".

On Sunday, Tamil Nadu state police detained eight protestors, including five women while they were protesting by making Rangolis on the streets of Chennai. They were later released.

A senior police official said that the protestors were held on charges of holding a demonstration without prior permission of the government and were later allowed to leave.

People in large numbers adopted the new innovative protest method by drawing these colourful structures outside their houses in Chennai.

For protest, you don't have to come on streets every time. You can protest through very regular and day-to-day activities. See the example of Tamilnadu people opposing NRC and CAA with #Rangoli#RangoliResistance #NoToNRC #NoToNPR #NoToCAA pic.twitter.com/VjACpjFUTw

Rangoli makes trending against the CAA in Tamilnadu ( it should spread throughout India ) haha pic.twitter.com/MTkEmHXcXM

The country has witnessed widespread protests against the CAA, which grants citizenship to persecuted non-Muslim immigrants from Pakistan, Afghanistan, and Bangladesh who arrived in India on or before 31 December 2014

On the other hand, NRC is India’s supreme court-monitored exercise to identify genuine citizens of the country and deport illegal immigrants.