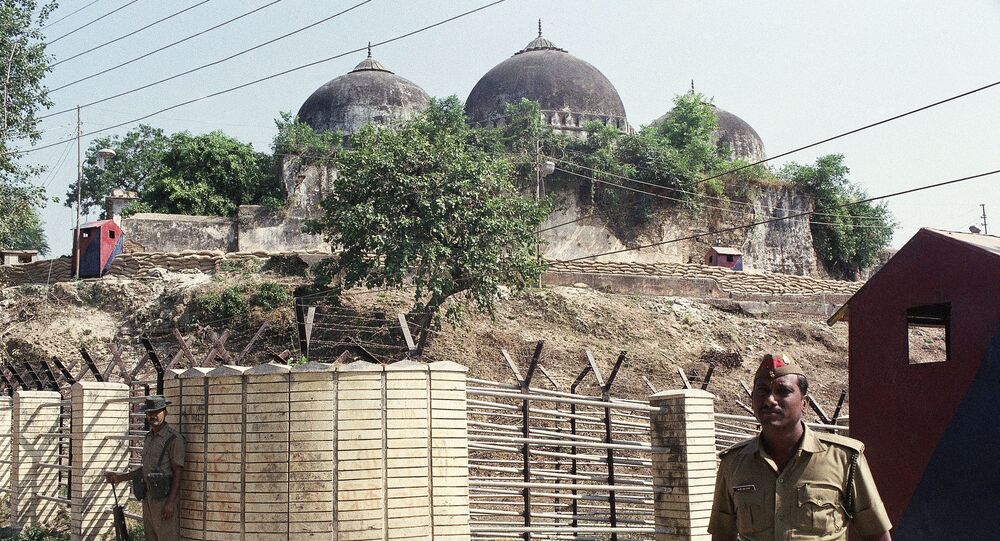 New Delhi (Sputnik): The 1992 demolition of the 16th century Babri Mosque, built by a loyalist of Mughal Emperor Babur, resulted in the Hindu and Muslim communities locking horns in what has been regarded as one of the longest-running land disputes in India’s legal history. The first case in the Ayodhya title dispute was filed 134 years ago.

The government in the Indian state of Uttar Pradesh on Tuesday announced it has identified five possible plots of land on which to build a new mosque in the city of Ayodhya in compliance with the apex court's historic verdict.

The state government said the five pieces of land identified are located in the areas of Mirzapur, Shamshuddinpur, and Chandpur. Each of these places is beyond the 15-km periphery where a temple dedicated to Hindus’ Lord Ram, the mythological King of Ayodhya, is to be constructed.

The Hindu community considers the site where the demolished Babri Mosque existed for over 450 years Lord Ram’s birthplace.

The Uttar Pradesh government said it will offer these plots of land to the Sunni Waqf Board (SWB), the institutional body that looks after all movable or immovable properties meant for religious, pious and/or charitable purposes as recognised by Muslim Law.

Communication with the SWB’s board of trustees on the matter of the temple's construction and other issues will take place once it is formed as directed by the Supreme Court’s 9 November verdict, it further stated.

Tuesday’s announcement comes days after a committee – the All-India Babri Masjid Action Committee (AIBMAC), which legally represented the Muslim side in the mosque demolition case declared that it will approach the apex court to collect the rubble from the mosque.

Sharia or Islamic law states that debris from a mosque cannot be used for any other construction work. The apex court is yet to give its order on how the debris from the 16th century Babri Mosque is to be used.

The 9 November apex court verdict on the temple-mosque issue came after a gap of 17 years. In the intervening period, differences over which community had a right to the disputed site had resulted in communal riots and a long drawn out legal battle.

A top court bench brought an end to the land dispute by awarding the site to Hindus to construct a temple and allotting five acres of alternate land near the site to Muslims.

AIBMAC, however, is preparing to file a curative petition after forwarding 18 review pleas challenging the high-profile verdict were quashed by the top court on 12 December.