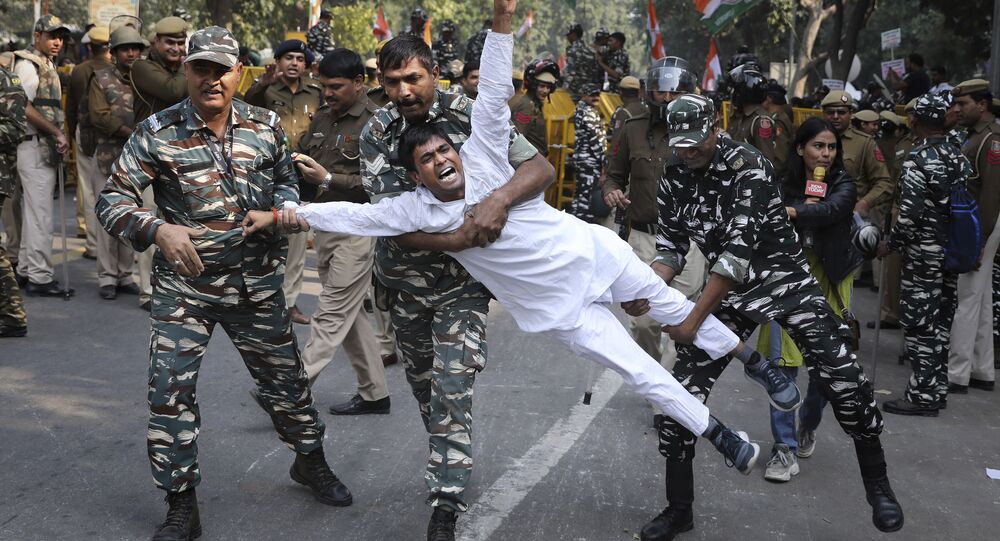 New Delhi (Sputnik): Both offered to travel to the state to meet the bereaved families of victims of the ongoing violent anti-Citizenship (Amendment) Act protests. The bill, allowing non-Muslim immigrants to receive Indian citizenship, was passed by the Indian parliament, but has sparked nation-wide protests.

In a video clip of the incident, shared by the Congress Party on Twitter, a policeman can be seen requesting that both Rahul Gandhi and Priyanka Gandhi Vadra move back, as prohibitory orders are in place within city limits.

Shri @RahulGandhi & AICC GS Smt. @priyankagandhi were stopped outside Meerut by the Police. They offered to travel in a group of 3 people, however, they were still stopped. They were on the way to meet families of victims of the violent anti-CAA protests in UP. #हत्यारी_भाजपा pic.twitter.com/3i2R5uoMhs

The Gandhi siblings were on their way to meet the families of those killed in the violence that broke out during the protests related to the contentious Citizenship Amendment Act passed by the Indian parliament recently.

The opposition party claimed that no government order was shown to the Gandhis denying them entry to Meerut city.  Later, both of them headed back to the national capital New Delhi.

Netizens said the police action was justified in anticipation of their arrival, possibly triggering more protests over the citizenship law.

This Gandhi family should be jailed.

Shameless and corrupted brother and sister have started Christmas party by enjoying the success of their policy of dividing the society and rule the nation. Unfortunately they get selfish people like Uddhav Thakre, Akhilesh Yadav etc to fulfill their dangerous ambition.

What about thousands of police personals injured during the protest ? @Uppolice If you are really concern about riot victims, Rahul ji should visit police as well, otherwise public see this as cheap stunt for minority vote bank.

​Relentless protests against the Citizenship (Amendment) Act (CAA) in Uttar Pradesh, India’s most populated state, have so far claimed the lives of at least 18 persons. In Meerut, five people have died — the most anywhere in Uttar Pradesh. The city has a history of being the hub of protests and riots in the past, being a communally sensitive area with a 63.4 percent Hindu population and a 34.43 percent Muslim population, as per the 2011 Population Census.

Meanwhile, prohibitory orders have also been imposed in parts of the national capital Delhi to prevent demonstrators from all walks of life, including students, from creating an untoward breakdown of law and order.

On Tuesday, protests for and against the controversial law were reported in the states of West Bengal, Assam, and Maharashtra, even as Prime Minister Narendra Modi allayed fears over it and the proposed nation-wide National Register of Citizens (NRC).

The Citizenship Amendment Act seeks to grant citizenship to non-Muslim minorities from Pakistan, Bangladesh, and Afghanistan. But it excludes a similar privilege from being extended to Muslim immigrants. Those protesting against the law have argued that it is unconstitutional and a clear case of religious classification and persecution.