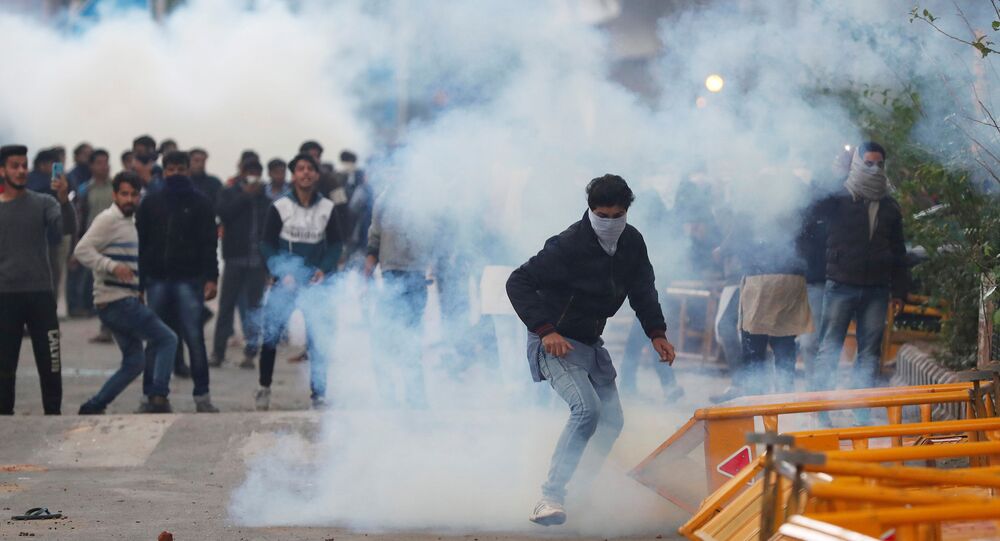 New Delhi (Sputnik) : India’s controversial Citizenship Act has triggered widespread protests across the country, with thousands of people including students and Bollywood personalities taking to streets.

Not only are ordinary people taking to the street to voice their disagreement over amended citizenship law, they're also taking to Twitter. The Citizenship Law grants citizenship to illegal immigrants from six religious minorities – Hindus, Parsis, Jains, Christians, Buddhists, and Sikhs, from Afghanistan, Bangladesh, and Pakistan, if they arrived in India prior to 31 December, 2014.

It, however, doesn't extend to Muslims - something which many claim violates the Indian constitution.

Netizens have blamed Indian Prime Minister Narendra Modi for what they believe to be an attempt to divide the nation on the basis of religion, with the hashtag #IndiaHatesModi trending on Twitter in the country.

They also suggested that the politician "sell tea, not (his) country", and alleged that if people supported the Modi government and the ruling Bharatuya Janata Party (BNP), that means they "hate Muslims".

To love bjp you have to hate muslims and to support BJP you have to boycott them absolutely. Sorry modi i cannot do that, i cannot giveup on my childhood friends with whome i celebrated eid and diwali i love them and i love my country, your hindutva rejected sorry #IndiaHatesModi

One of the social media users also urged people to save India’s democracy from Modi and his government:

#IndiaHatesModi please save Indian democracy from Modi and his government.

Another netizen expressed the opinion that it’s not just Muslims but the entire community that is standing against the prime minister:

#IndiaHatesModi
Not saying bcoz only Muslim are tortured but every Indian is somehow in difficulty against modi govt https://t.co/qr0YHeBavb

#IndiaHatesModi
Exactly 6 years ago people did not expect such things from modiji. Now he is totally failed PM in Indian #History@surender9929

He has made this country in emergency mode. https://t.co/xykc4kQS5s

The Indian parliament recently approved a Citizenship Amendment Bill, which after being signed by President Ram Nath Kovind is now the Citizenship Amendment Act (CAA). The new Act along with a proposed National Register of Citizens (NRC) have resulted in massive protests, especially by the Muslim community, who allege it is discriminatory and favours Hindus, Sikhs, Christians, Parsis, Jains, and Buddhists.

The NRC calls for the identification of all illegal immigrants living in India, but some Muslims are concerned that when the NRC is launched across India, only Muslims will have to prove their citizenship and not people of any other faith.

The prime minister has recently reassured the public that the new law "does not affect any citizen of India of any religion", and that "no Indian has anything to worry" about.

"I want to unequivocally assure my fellow Indians that CAA does not affect any citizen of India of any religion. No Indian has anything to worry regarding this Act. This Act is only for those who have faced years of persecution outside and have no other place to go except India."

India is home to about as many Muslims (approximately 200 million) as neighbouring Pakistan, making its Muslim population second to only that of Indonesia, where an estimated 230 million of the nation's 261 million people. However, they constitute only 14 percent of India's population and Modi's party has been accused of policies which target Muslims.