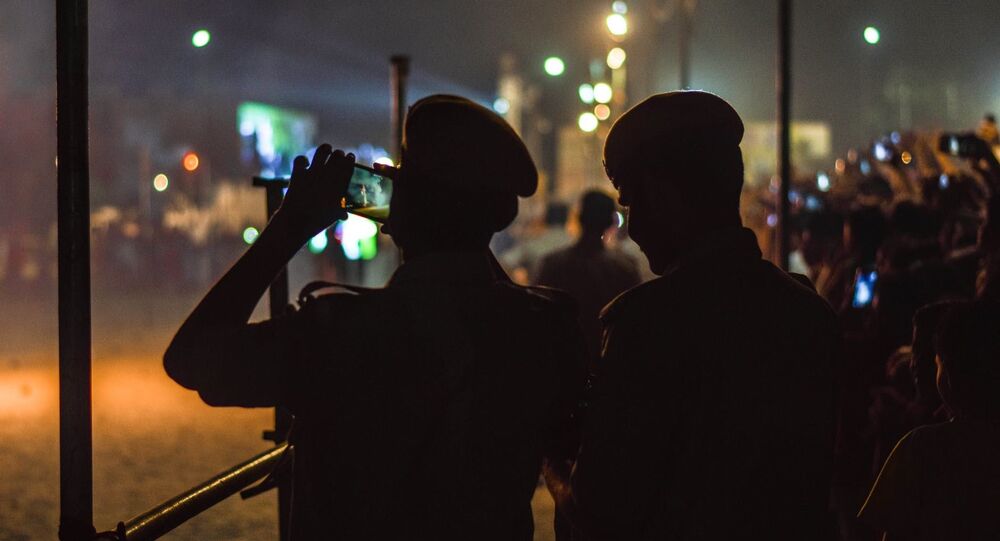 New Delhi (Sputnik): On Tuesday afternoon, three men took out their pistols and opened fire inside a district court in Uttar Pradesh’s Bijnor area, killing the prisoner Shahnawaz Ansari, who was a suspect in a twin-murder case. He was appearing before the court for a hearing when he was killed. Police arrested all three assailants.

As many as 18 policemen have been suspended after a murder suspect was shot dead inside a courtroom in the Indian state of Uttar Pradesh, police officials said on Wednesday.

The man, who was on trial for a double murder, was shot dead allegedly by three men present inside the court on Tuesday. The incident occurred in front of the Chief Judicial Magistrate during the court proceedings.

Local reports suggest such was the intensity of the firing inside the courtroom that even the judge and other court staff had to duck for cover.

A policeman and a court staffer also suffered injuries in the incident and were taken to hospital.

Visuals coming in from UP Bijnor district. In a daring incident, assailants opened indiscriminate fire in CJM courthouse in Bijnor during court proceedings in the double murder case of a BSP leader and his nephew who were gunned down in May this year. One person is dead, and a constable was injured. pic.twitter.com/Ny7PkaSS3a

An advocate present on the occasion said the entire courtroom ducked out of fright when shots were heard. The court premises were immediately cordoned off following the incident.

According to police, the three assailants were arrested. They include Sahil, the son of the late legislator of Bahujan Samaj Party Ehsan Ansari, who was murdered along with his nephew, allegedly by Shahnawaz Ansari over an argument concerning the purchase of disputed properties on 29 May.

Shahnawaz Ansari was killed in the Tuesday incident in the courtroom.

In an official statement, Bijnor police also stated that three suspects were involved in the murder of the gangster Shahnawaz Ansari, who had 21 cases pending against him, including related to the twin murders, as well as three attempted murders, looting and holding a person for ransom among others.

The murder was the result of a business rivalry and not politically motivated. It appears Sahil avenged for his father’s murder, said police.