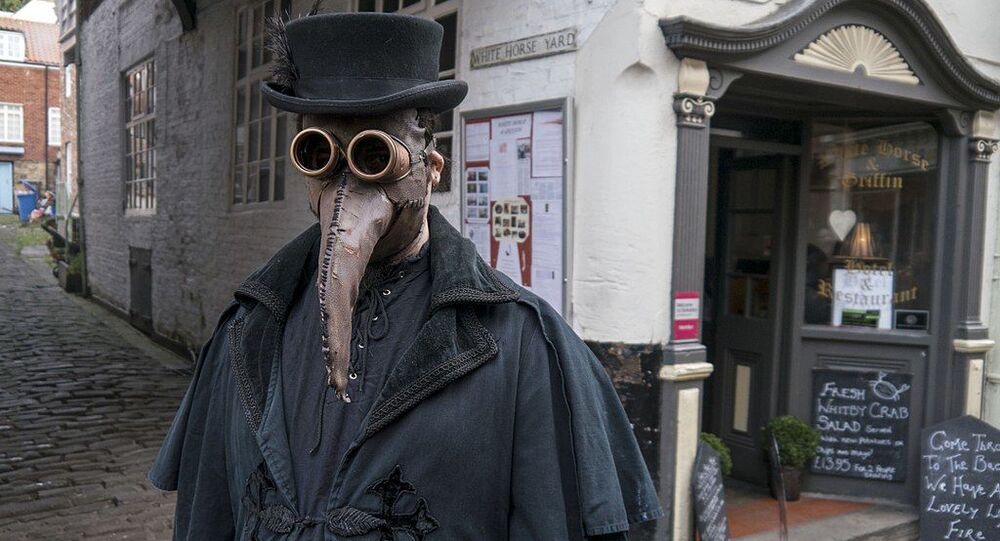 The outbreak of Bubonic plague killed more than 50 million Europeans in the 14th century. it was well-documented, unlike previous pandemics, which struck the Byzantine empire.

The name “Black Death” may sound like something from the heavy metal music hall of fame (and there actually was an Ohio rock quartet with that name in the 1980s, which Youtube fans called the «the first African American heavy metal band»). But the term’s original meaning did not come from the world of headbanging and distorted guitars.

In the middle of the 14th century the “Black Death” bubonic plague pandemic, which was also often compared to one of the four horsemen of the Apocalypse, or Pestilence, killed more than half of Europe’s population.

Just like the 6th Century Plague of Justinian, which, according to some sources, claimed millions of lives across the Byzantine Empire, the 14th-century pandemic was caused by a tiny bacterium called Yersinia pestis. Everyone who was bitten by fleas carrying the bacteria was at risk of developing bubonic plague – one of three types of plague. It causes inflammation of lymph nodes all over the human body, which, if untreated, can lead to fever, seizures and painful death.

The Black Death arrived in Europe around 1346. Historians believe, that just like earlier major bubonic plague outbreaks, it was caused by an infection transmitted by rodents carrying infected fleas while sailing the high seas along trade routes. In 1347 a group of Genoese merchants might have brought the plague to Italy from Crimea in that exact manner. From the Apennines, the disease quickly spread inland-to other European destinations, including the northernmost Scandinavian countries and England.

The pandemic was well-documented due to the increased literary skills of the Middle ages. In a series of novellas called “Decameron”, Italian author Giovanni Boccaccio told the tale of a group of men and women hiding from the disease at a villa in Florence.

While talking about the outbreak Boccaccio wasn’t always right in describing the mechanisms of transmission, but he correctly listed “the messengers of death” seen in persons who contracted the illness:

“Unlike what had been seen in the east, where bleeding from the nose is the fatal prognostic, here there appeared certain tumors in the groin or under the arm-pits, some as big as a small apple, others as an egg; and afterward purple spots in most parts of the body; in some cases large and but few in number, in others smaller and more numerous — both sorts the usual messengers of death.”

Like many people at the time, Boccaccio was wondering why the plague struck his home country, suggesting that it could have been “the influence of the planets” or that “it was sent from God as a just punishment for [people’s] sins”.

Besides “Decameron” there are many other books and movies about the medieval outbreak, including the 2010 British film called “Black Death”, which sheds light on the fear and the superstitions that surrounded the outbreak.

Although some medical knowledge, including herbal medicine and even surgery, was available in the 14th century, there was no effective cure for the plague at the time. It contributed to both the high death toll, and the lightning-fast spread of the disease. Only a century later, Italian physician Girolamo Fracastoro founded epidemiology and dedicated his life to studying ways in which people contract contagious diseases.

As for the Black Death, the consequences of the outbreak were tremendous. More than 50 million people lost their lives, with the Grim Reaper coming after nearly 50% of Parisians, and with cities such as Hamburg and Bremen losing more than 60% of their inhabitants. The disease came back numerous times until the 17th and 18th centuries, causing large numbers of fatalities, but they could not be compared to the severity of the initial 1346 outbreak.

The end to the dangers of Bubonic plague came in the first part of the 1920s, with the invention of antibiotic drugs. A cocktail of widely available antibiotics, which may include streptomycin, gentamicin or doxycycline, can now effectively handle “Black Death".