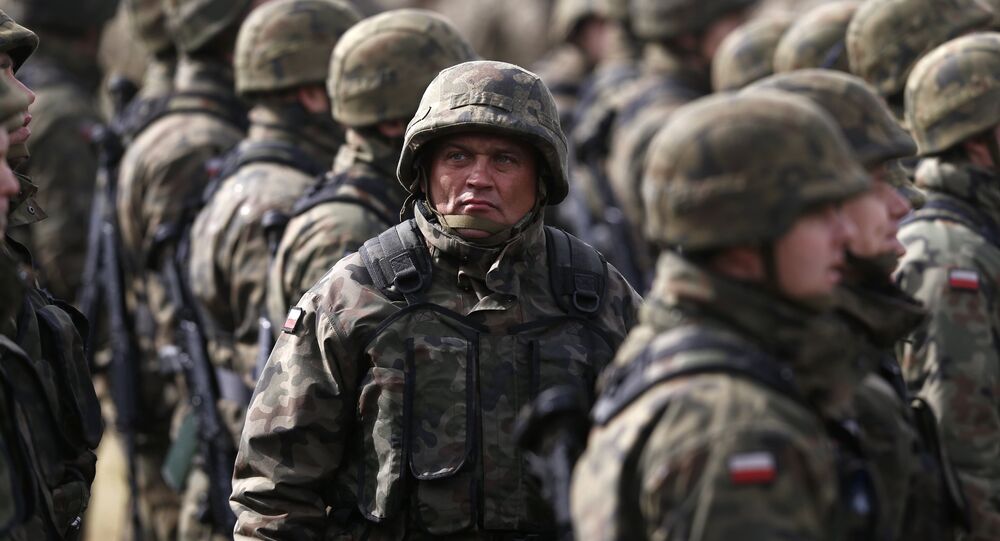 It seems the idiom “the best defense is a good offense” is the best way to describe the principle behind the bloc’s creeping eastward expansion. NATO’s recent military deployments to the Baltic states, right on Russia’s doorstep, were hidden behind a smokescreen of media campaigns, which blamed Russia for increased tensions and “war preparations”.

In 2009 US and Russian diplomats agreed to hit the symbolic red “Reset” button, which was meant to fix bilateral relations between the two countries. Moscow agreed to assist Washington with its military transit and supply operations in Afghanistan. The White House, in turn, announced that it would drop the Bush administration’s plans to build a missile defense shield in Europe.

However, the whole “reset” idea didn’t last long. In 2016 NATO sent four battle groups of 1,000 soldiers to Russia’s borders, followed by the deployment of Patriot long-range anti-aircraft missiles to Lithuania as part of the Tobruk Legacy exercise.

© Photo : Russian Defense Ministry
Skills on Point: Russian and Belarussian Forces Show Their Power at Zapad 2017 Drills
23
Such a quick build-up of hostile forces near Russia’s borders was accompanied by a Western mainstream media campaign, which warned the Europeans about Russia’s military capabilities.

In November of 2016 the Washington Post published an article, showing the range of  Russian missiles stationed in just one location – the Kaliningrad region — and using these maps explained how “the Russian arsenal on the Baltic, some of which has been tested in Syria, is potentially a game-changer.” Twitter’s “collective consciousness” quickly replied by posting maps of all US military installations near Russia’s borders. The maps show how some Old World nations are home to hundreds of such facilities, while Russia has no such presence anywhere near the US.

Another anti-Russian media campaign was launched by the West in the fall of this year, ahead of the joint “Zapad-2017” exercises held by Russia and Belarus. The event was quickly targeted by an avalanche of rumors on Twitter and several “hit pieces” in the mainstream media. Some Western observers claimed that Russia would leave its troops in Belarus after the exercises (which  didn’t happen) to prepare for a future attack against the Baltic States. Others were certain that it was not Estonia, Latvia and Lithuania, but Norway that was next in Russia’s sights.

Russian officials say that they are well-aware of the media “smokescreen,” surrounding NATO’s continued eastward expansion. The country’s foreign minister Sergei Lavrov addressed the situation in the Baltics during this year’s Ministerial meeting of the Barents Euro-Arctic Council, where Russia currently holds the chairmanship.

"We perceive processes going on there as part of a well thought-out strategic policy of containing the Russian Federation. NATO leaders, primarily US leaders, don’t conceal this strategy. This strategy is being consistently implemented and is manifested in rapidly expanding efforts to establish a global missile defense system that has nothing to do with Iran and North Korea but which is linked with containing Russia and the People’s Republic of China."

© Sputnik / Igor Zarembo
NATO Buildup in Europe 'Went Unnoticed' Amid Criticism of Russia-Belarus Drills
The North Atlantic Treaty Organization was created as an alliance of 12 members, with the US being one of its “founding fathers.” NATO has been growing steadily since its inception in 1949, and even after the fall of the Warsaw Pact, which was the organization’s biggest adversary, NATO continued to accept new members.

Moscow expressed concerns about the alliance’s eastward expansion, but the process went ahead.

At the turn of the millennium, the so-called Vilnius group, which included Estonia, Latvia and Lithuania joined the bloc, becoming the first former Soviet republics to pledge allegiance to the alliance’s goals.