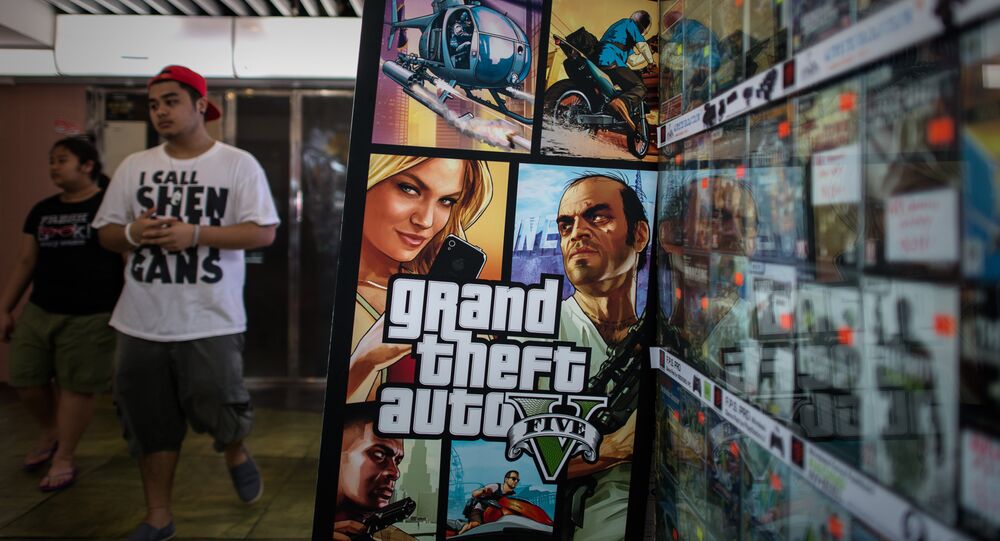 If you look at the world map, you will never find Liberty City, San Andreas, Los Santos or Vice City. But for millions of gamers worldwide who love the Grand Theft Auto series, each of these locales is more than a name – it’s a separate open world “sandbox” full of fun and adventure.

Most things you find in the GTA universe are almost stereotypically American. Country music radio, the accents of the characters whom you meet in Sonora desert, “Republican Space Rangers” commercials on fictional in-game radio channels, and even the series’ name itself — Grand Theft Auto, which in US police jargon means “motor vehicle theft,” — everything reminds you that you’re  somewhere “stateside.” With all of that in mind you’d probably never guess that the whole GTA franchise was launched by a group of Brits.

David Jones, a Scottish programmer, who invented the game Lemmings, came up with the idea for GTA in the late 1990s. Together with the Houser brothers – Sam and Dan, as well as Leslie Benzies and Aaron Garbut, Jones founded a company called DMA Design, which was later transformed into gaming industry giant Rockstar Games.

The first game in the series was set in a two-dimensional world. Players could freely roam around the city, robbing banks, stealing cars and evading police pursuits. Despite its simplicity, the game sold more than 150 million copies. It was initially intended for the Commodore Amiga, but gained popularity on other platforms, including PC and Playstation, as well as handheld game consoles.

GTA’s sequel was a success too, but the defining moment for the whole series came with the release of Grand Theft Auto 3, which was set in Liberty City – a fictional version of New York. The game had immersive 3D graphics and a soundtrack which could be accessed via radio stations that players could switch on once inside a vehicle. Even though Rockstar had to postpone the 2001 release of Grand Theft Auto 3 due to the 9/11 attacks in order to change references and gameplay deemed inappropriate, the title was a huge success, becoming the best-selling game of the year and selling over 17 million copies.

The series’ popularity was growing, but it also attracted critics. Many argued that the GTA’s violent and explicitly criminal nature set a bad example for younger gamers.  The case of Devin Moore, a teenager from Alabama sparked controversy in 2003: the young man was found guilty of the first-degree murder of three police officers. The victims’ families blamed the murders on the influence of Grand Theft Auto games, which Moore was playing, and sued the developers.

Despite controversy, Rockstar Games went on with the series, releasing one successful sequel after another. Following the release of GTA Vice City, which was loosely based on the plot of the movie Scarface and set in 1980’s Miami, the game designers built a sequel centered on early 1990’s Southern California gang culture in Grand Theft Auto: San Andreas, which was released in 2004.

After that, the company decided to go back to New York and launched GTA IV, which brought the players to Liberty City’s criminal underworld.

​GTA 5, which features separate single player and multiplayer modes, brings together a gang of retired bank robbers who return to their criminal careers in modern-day Los Santos, the LA lookalike that featured in San Andreas.

The multiplayer mode allows several dozen players to freely roam around the city and complete bank heists, stunt mission, races and deathmatches.  The game features its own currency, and the  possibility to top up in-game accounts with real money.

The game is extremely realistic, giving players freedom to do almost anything. Fans can buy clothes, apartments, cars and motorcycles and show off their achievements using the image galleries of an in-game Instagram-like phone app called Snapmatic.

GTA 5 was named the fastest-selling entertainment product in history after earning 1 billion dollars in the first three days after its release.

So whether you’re a racing games fan, you like first-person shooters, or you’re in pursuit of virtual riches and want to build an imaginary criminal empire, with its diverse content and fast-paced assignments Grand Theft Auto may very well give you hours or even days of entertaining experiences.

We'd love your feedback at radio@sputniknews.com