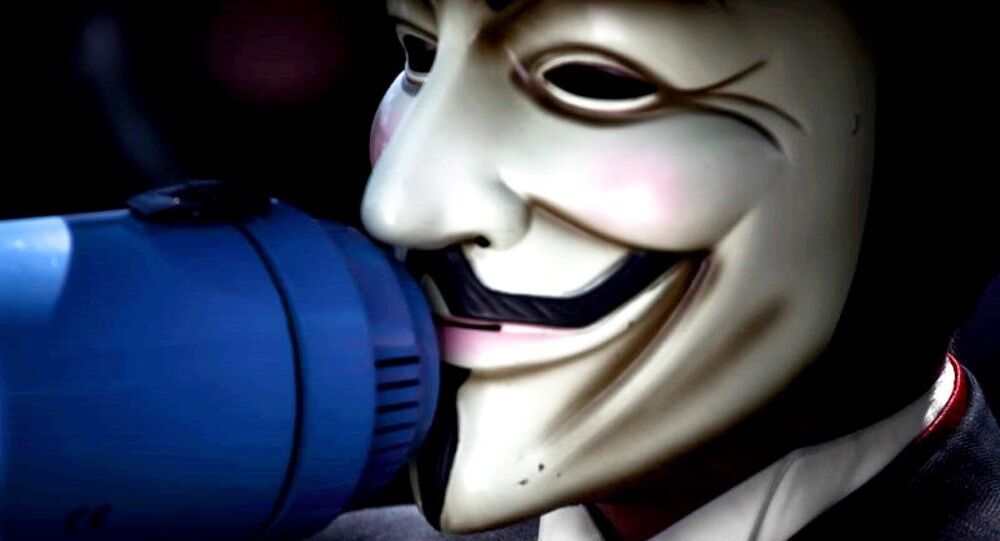 They call themselves “legion,” but, at the same time, they claim that they are an idea rather than a group of people. It’s hard to say how large this decentralized community is, and who, exactly, are its members. But as their actions and messages always make headlines, people wearing Guy Fawkes masks are clearly becoming a new type of celebrity.

Their logo is a man in a black suit with a question mark instead of a head standing in front of a graphic of the Earth. Their messages on YouTube use text-to-speech computer software to mask their real voices.

“We are Anonymous. To most of you we are computer hackers. To your governments we are a terrorist organization. To corporations we are wicked infiltrators and harbingers of merciless justice.”

The history of Anonymous goes back to the early 2000s, when users of an Internet forum called 4chan, one of the first English-language imageboards on the World Wide Web, began posting messages and pictures without identifying themselves. After a while, anonymity become a key principle of 4chan and other similar forums, and even though users were allowed to use nicknames, this was considered uncool, and they were referred to derisively as “newfags.”

By the mid-2000s Anonymous was doing more than simply chatting and posting pictures. They began gathering in flashmobs, engaged in mass pranks and raided other websites — mostly mainstream forums and social networks.

The hacktivists were usually working toward a loosely self-agreed goal — whether a form of social justice, or mere entertainment — typically referred to as the "lulz," interpreted as “laughs.”

But what made the global hacktivist collective truly famous was the serious stuff: protests, rallies and global hacks targeting government agencies of the US, Israel, Tunisia and many other organizations.

Anonymous played a significant role in the Arab Spring and Occupy movements, the Ferguson protests, as well as in cyberattacks on Daesh social media accounts. Hacktivists targeted child pornography sites, copyright protection agencies, the Westboro Baptist Church and the Church of Scientology, along with global corporations, including PayPal, MasterCard, Visa, and Sony.

Now a bigger plan has been announced: by making its own Humanity Party recognized during the 2016 US presidential elections, Anonymous, according to YouTube posts, is aiming for the White House. To do this, hacktivists are asking US voters to write the word ‘Anonymous’ in the write-in space on their ballots.

“If, by the voice of the people Anonymous receives more votes than any other candidate, or even if Anonymous receives a relatively good showing at the voting booth, the Humanity Party then will register as a lawful political party… We will find and support viable candidates for our party’s nomination during the Presidential Elections of 2020.

As thousands of young activists, forming the core of the Anonymous movement in the early 2000s, now enter their 30s and 40s, their influence on social life and politics grows. Perhaps a new political party will gain momentum, and in a few years’ time an Anonymous candidate will be nominated for the White House. The question is, whether he or she will be willing to take off that Guy Fawkes mask.