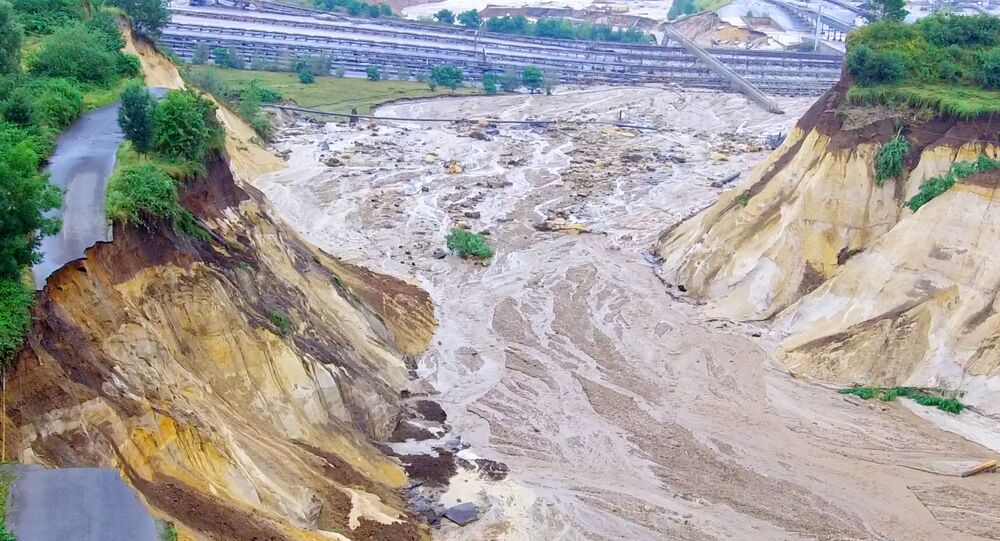 Major Floods to Have Struck Europe Over the Past Five Decades

On Thursday, Germany was hit by massive floods that have left at least 58 people dead and an estimated 1,300 missing, with the torrents of water disrupting the country's infrastructure, washing away vehicles, and leaving hundreds of households without electricity.

As western Europe, particularly Germany, Belgium, France, and the Netherlands, struggle with the aftermath of unusually heavy rainfall, with water levels still rising in some parts of Germany, here is a look at 10 massive floods that have occurred in Europe over the last five decades.

Eighty-six people were killed in the disaster that swept across Bosnia and Herzegovina, Croatia, Serbia, and Romania in 2014, following low-pressure cyclones named Tamara and Yvette caused landslides and floods around southeastern Europe.

It was Serbia and Bosnia and Herzegovina that suffered the most, as the rain there was the heaviest in 120 years of recorded weather measurements. Hundreds of thousands of people were forced out of their homes.

In early July 2012, Russia's Krasnodar Territory, near the coast of the Black Sea, was hit with massive floods that left 172 people dead. The governor of the region said at the time that "nothing of the kind [had occurred] for the last 70 years". The floods were caused by heavy rainfall, with almost half a year's worth of precipitation hitting the region over two days.

© AFP 2021 / MIKHAIL MORDASOV
A man works among the debris after the floods in the town of Krymsk in the southern Russian Krasnodar region, on July 10, 2012. The country's worst flooding disaster of recent history killed at least 171 people while nearly 35,000 people lost part or all of their belongings in the flooding, Russia's emergencies ministry said yesterday.

The disaster occurred in Jarovnice, Slovaka on 20 July 1998 after heavy downpours caused what appeared to be the worst floods in Slovak history. With rivers breaching their banks and destroying everything in their path, the flood resulted in 63 deaths.

The 1994 flood in the Italian region of Piedmont saw some 77 people lose their lives, with the area suffering some 14 billion euros in damage. The flood was caused by a three-day period of extremely heavy rain in the area that prompted various tributaries of the Po River to overflow.

Occurring in 1997 in the Czech Republic and Poland, the deluge killed 115 people after the river basins of the Oder and Morava flooded following extensive rainfall.

Beginning in the Czech Republic, the flood then moved to Poland and even affected Germany. For Poland, the flood turned out to be one of the country's worst incidents, and was named the Millennium Flood.

The incident took place on 28 July 1987 in the Lombardy area of Italy, with the Val Pola avalanche leaving 53 people dead in what is now known as the Valtellina disaster.

The calamity, which also affected the regions of Sondrio, Brescia, Bergamo, Lecco, and Como, took place after heavy rainfalls along with rapid glacier melting.

Occurring in July 1985 in the Italian village of Stava, the flood was caused by the collapse of the Val di Stava Dam. Some 180,000 cubic metres of water, mud, and sand were released into the village, killing 286 people and destroying 63 buildings and 8 bridges

The incident is one of Italy's worst disasters.

What is widely known as the "Capella" storm ravaged Ireland, the Netherlands, the United Kingdom, Denmark, Norway, and Germany in January 1976. The disaster left 82 people dead and was caused by a storm surge and coastal flooding around the southern coasts of the North Sea.

The 1970 floods marked the nation's worst loss of life in modern history, with the disaster claiming 209 lives. The flood occurred due to torrential rains, high winds, and a heat wave that melted the snow in the Carpathian Mountains.

The floods began in the middle of May and lasted into mid-June, not only killing over two hundred people but also leaving at least 265,000 homeless after destroying or damaging more than 40,000 houses.

© AFP 2021
Picture taken 10 October 1963 of destroyed house in a village in Piave-Vajont Valley after a dam collapsed 09 October in the valley. 3,000 people were feared drowned in this disaster.

Taking place on 9 October 1963, the deluge in the province of Erto e Casso, Italy, claimed 1,917 lives after one of the tallest dams in the world, the Vajont Dam, overflowed due to a megatsunami caused by a landslide. Fifty million cubic metres of water formed a 250-metre wave that struck the dam and led to the destruction of several villages and towns.

While the initial cause of the large wave was natural, many blamed the government for disregarding multiple warnings and reports that Monte Toc, the mountain holding the dam, was geologically unstable.

At Least 15,000 People Reportedly Evacuated Due to Floods in Netherlands