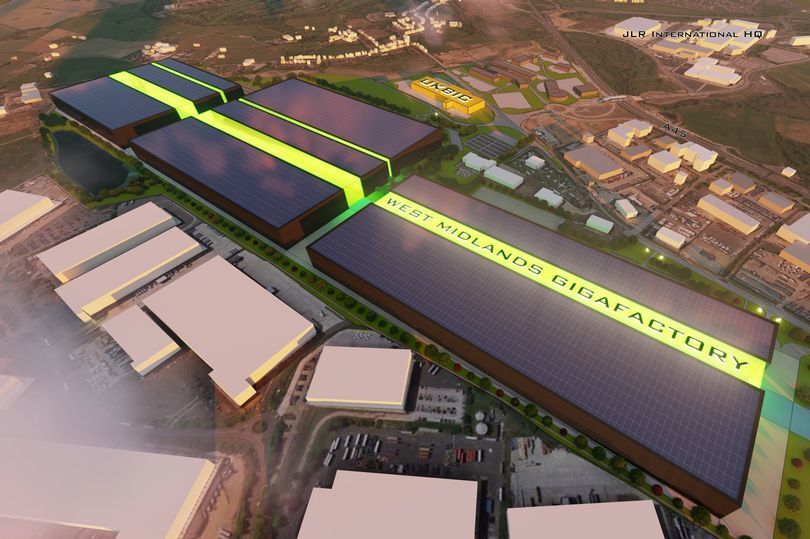 Coventry is an English city famous for being bombed by the Germans during the Second World War and for being the home of the Jaguar Land Rover car company. It has been chosen as the site of a new electric battery gigafactory but where else in the world are these being built?

A planning application has been submitted for a gigafactory on the site of the derelict Coventry Airport which would employ 6,000 people making electric car batteries.

Coventry City Council - which owns the land and has gone into partnership with the Rigby Group - plans to build a 1.7 million square metre factory which would manufacture batteries for the fast-growing electric car market.

Delighted to announce that our plans for a West Midlands Gigafactory have been submitted to Coventry and Warwickshire planners.

We’re pressing on now so we can have planning permission in place for when any commercial negotiation concludes. pic.twitter.com/ISQ87a64rO

​The Mayor of the West Midlands, Andy Street said it was "mission critical that the West Midlands secures a gigafactory" to provide for the region’s car industry and also for the "future of our planet."

The British government has said it will ban the sale of new petrol and diesel vehicles by 2030 and the investment bank UBS estimates 40 percent of all new cars sold globally will be electric.

But this has created a massive demand for batteries. So where else in Europe are battery gigafactories planned?

Earlier this month the Japanese car manufacturer Nissan recently announced plans for a battery gigafactory in Blyth, not far from its car factory in Sunderland, in the north east of England.

British Prime Minister Boris Johnson said Nissan's move was "a major vote of confidence in the UK and our highly skilled workers in the North East" and his spokesman said it was a "pivotal moment in the electric vehicle revolution."

Tesla is currently building its first European gigafactory in Grünheide, just outside Berlin.

On its website Tesla says: “Gigafactory Berlin-Brandenburg will be the most advanced high-volume electric vehicle production plant in the world. Starting with Model Y production at launch, we will establish original vehicle design and engineering for worldwide markets out of Germany.”

Tesla founder Elon Musk explained to Auto Express in 2019 why he had chosen Germany ahead of Britain: “Brexit made it too risky to put a gigafactory in the UK. We’ve decided to put the Tesla gigafactory Europe in the Berlin area. I come to Berlin a lot – Berlin rocks!”

Daimler - which owns the Mercedes brand - announced in 2017 plans to build a 500 million euro battery factory in the German town of Kamenz, near Dresden.

The plant provides batteries for the Mercedes EQ SUV, its first all-electric car.

Earlier this week Volkswagen and a Chinese partner, Gotion High-tech, announced plans to build a battery factory in Salzgitter, Germany.

Production at the site in Lower Saxony could start as early as 2025.

Gotion, based in the city of Hefei, would be VW’s "technology partner for the cell factory layout, machinery, and production processes."

The chairman of VW, Herbert Diess, said the company aimed to become "one of the top three" battery manufacturers globally.

Northvolt plans to manufacture batteries for 300,000 electric vehicles a year from Skellefteå, a much chillier location, in northern Sweden.

Proud to join forces with @volvocars in a partnership geared to build safe, sustainable batteries tailored to power the next generation of Volvo and @PolestarCars electric cars! Full press release 👉https://t.co/NXbd0HX8Eh pic.twitter.com/FPxOlXW4XX

​The Swedish factory has received a US$14 billion order from Volkswagen and has agreed to provide batteries for Swedish lorry manufacturer Scania.

The factory’s manager, Fredrik Hedlund, told the BBC last month: "We are building a totally new industry that hasn't really existed, especially in Europe, at this scale. A lot of people, think that this is the coolest project in Europe right now."

The South Korean chemical giant LG Chem has plumped for Poland as the location for a new battery gigafactory.

LG Chem has borrowed 250 million euros from the European Bank of Reconstruction and Development (EBRD) towards the total cost of 2.8 billion euros.

The plant in Wroclaw, in western Poland, will produce lithium-ion batteries for all types of electric vehicles.

The factory is due to completed in 2022 and LG Chem is aiming to supply batteries for one million electric vehicles per year.

SK Innovation already owns two battery factories in Komárom on the Hungarian-Slovakian border but they are much smaller than the new plant.

We are pleased with the recent decision by #Stellantis to build their next #gigafactory in #Termoli. Italy’s rich automotive heritage, competent workforce and well-connected location makes it the ideal setting for battery production and the new wave of green industrialisation! 🇮🇹 pic.twitter.com/ZE4yPdjeS2

The company has decided to build three European gigafactories.

One will be in Douvrin, near Lille in northern France, and another in Kaiserslautern, Germany.

But Stellantis chief executive Carlos Tavares, who held a virtual meeting in May with Italy's industry minister Giancarlo Giorgetti to finalise the deal, said the main one would be at Termoli on Italy's Adriatic coast.

Italy’s main car factories are in Turin and the Piedmont region, so the chosen location is a strange one as it is far from northern Italy.