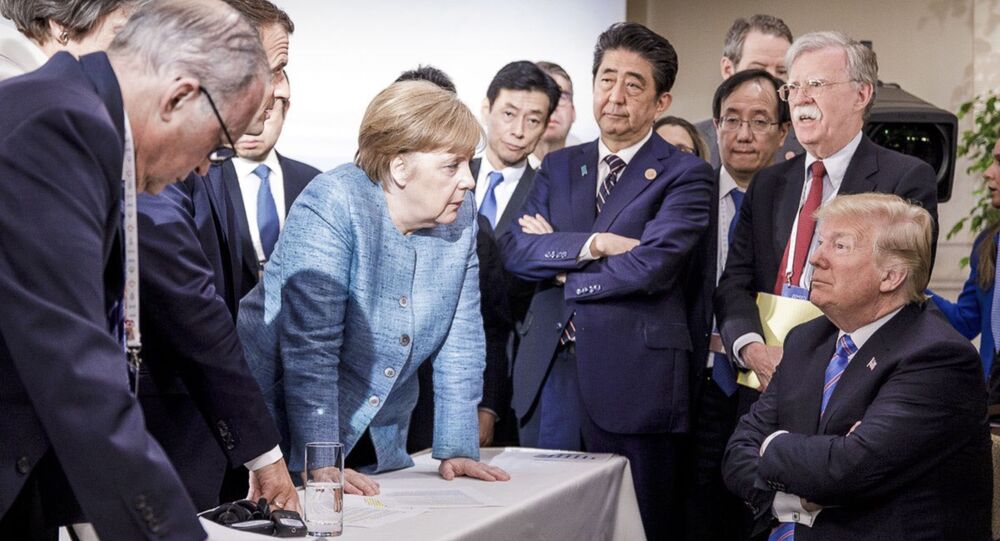 'Friendly' Wiretaps, Neck Rubs and Handshakes: History of Merkel's Encounters With US Presidents

Over the course of her 16 years in power, the German chancellor has had the chance to work with all sorts of US presidents – from those who treated her as a friend, to those who would not even shake hands with her.

German Chancellor Angela Merkel is scheduled to make her last official trip to the US on 15 July in order to meet with President Joe Biden and discuss the state of bilateral affairs. Just two months from now, Germans will elect a new chancellor, after Merkel announced her plans not to run for a fifth term.

There are all sorts of expectations regarding her meeting with Biden: on the one hand, she expressed hope for better cooperation with the US under the new POTUS, on the other, disagreement over the Nord Stream 2 issue may cast a shadow over their talks. But Merkel is no stranger to having friendly, complicated, or sometimes even bizarre relations with US presidents – in fact, she has quite a history with them:

The first US president Merkel worked with was Republican George W. Bush and the two apparently were quick to get along, with POTUS growing especially fond of the German chancellor. He talked non-stop about a wild boar roast that Merkel treated him to during his July 2006 visit to Germany.

Soon afterwards, Bush was spotted giving a sudden shoulder rub to Merkel, who was sitting at a Group of Eight summit in St. Petersburg. The German chancellor was caught off guard and raised her hands in surprise, but had a good laugh after the sudden "massage". Bush later explained that it was "a spontaneous reflection of friendship" on his part towards Merkel.

Several issues marred US-German relations under the Obama administration. It all started with Merkel snubbing Obama, then a presidential hopeful, in July 2008 by not allowing him to deliver a speech at the Brandenburg Gate in Berlin – a site reserved for heads of state.

But the greatest strain on bilateral ties happened in 2013 after US National Security Agency (NSA) contractor Edward Snowden leaked thousands of classified documents that revealed, among other things, that the agency had spied on not only enemies of the US, but on allies as well - Germany included. Judging by Snowden's revelations, even Merkel's phone had been tapped by US intelligence, a move not expected from "friends", as the chancellor herself noted at the time.

Despite these hiccups, Merkel managed to build working relations with Obama, who praised her as his "favourite partner" among foreign heads of government. The former US president gifted Merkel with the highest civil award, the Presidential Medal of Freedom, and the two were famously spotted actively communicating at the G7 summit in 2015, after the NSA espionage affair.

Merkel, however, had a tougher time building relations with Donald Trump. The latter criticised Germany for a list of issues, ranging from its under-contribution to NATO's defence spending goals, to buying gas from Russia. The German chancellor would later say in 2017 that the US was no longer a reliable partner for the European Union, and Germany in particular.

The March 2017 visit of Merkel to Washington became one of the best demonstrations of just how complicated the relations were between the two heads of state. When reporters asked the two to symbolically shake hands, Trump ignored (either deliberately or inadvertently) Merkel's offer to do so.

So, when Joe Biden was inaugurated, the German chancellor was quick to show a sigh of relief, suggesting that "things are looking a great deal better for multilateralism" in 2021 than they did in 2019, when Trump was still in power. While Merkel and Biden won't have much time to work together, they still have important issues to discuss on Thursday that may determine whether Washington will return to full engagement with Europe and is ready to compromise on certain matters instead of issuing ultimatums. At least this time there is hope for them to find common ground, since the two already met each other when Biden was Obama's vice president (and shared a laugh or two in 2009).

'As Far as Wiretapping, We Have Something in Common': Trump Told Merkel in March 2017